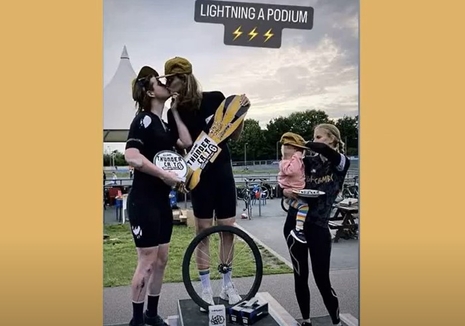 It may take a Parliamentarian to explain the convoluted rules, but two transgender men dusted the field in a London cycling event a few days ago. They kissed on the podium as the third-place finisher, a woman holding her baby, looked on. It’s a sign of the times in a great big gender-convoluted sporting world.

The top two finishers in the ThunderCrit Lightning division were males identifying as females, Emily Bridges and Lilly Chant. The event website described the category as a cycling race in which so-called “cis-women,” non-binary people, trans men and women are eligible to compete.

Any way you slice it, bigger, stronger males are going to dominate. And they did.

In fact, Bridges wants the best of both worlds – male and female. He is also currently dominating men’s cycling, too. He’s won men’s division races during his testosterone suppression. The British cycling federation has the good sense (in a world lacking good sense) and lists him as male. Imagine that in this time of LGBT browbeating.

Further proof of the Brits standing up to power of LGBT fascism came when Brides was not allowed to compete in the March National Omnium Championships women’s race.

“Under the British Cycling Transgender and Non-Binary Participation policy, Emily Bridges was due to participate in the British National Omnium Championships on Saturday 2nd April,” British Cycling announced March 30. It based the decision on a ruling by the Union Cycliste Internationale (UCI), which stated “transgender and non-binary inclusion is bigger than one race and one athlete – it is a challenge for all elite sports.”

UCI called for more clarity in the sport of cycling because all participants deserve it. It also called for a coalition to learn more about achieving fairness in a way to maintains dignity for all athletes.

Here’s a little tip for the UCI: if it’s truly fairness that you seek, keep separate divisions for males and females and resist public pressure to foolishly recognize gender identity instead of biological reality.