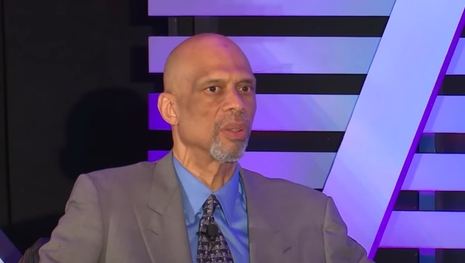 LeBron James is out with a sprained ankle, and on Sunday Kareem Abdul-Jabbar gave him a heavy dose of emotional pain. Abdul-Jabbar criticized the Lakers forward for hypocrisy and said he isn’t trustworthy.

The NBA’s all-time leading scorer, Abdul-Jabbar slammed the league’s No. 2 career scorer, saying he plays both sides of some issues. James bears “a greater responsibility in how he conducts himself given his elevated platform,” Abdul-Jabbar commented.

"Some of the things he's done and said are really beneath him, as far as I can see," Abdul-Jabbar said. "Some of the great things that he's done, he's standing on both sides of the fence almost, you know? It makes it hard for me to accept that when he's committed himself to a different take on everything. It's hard to figure out where he's standing. You've got to check him out every time."

Among James’ questionable behavior was mimicking a dance popularized by former all-star Sam Cassell in December. "For me, winning is enough," Abdul-Jabbar said in a video. "Why do you need to do a stupid, childish dance and disrespect the other team on the court? It doesn't make sense. GOATs (greatest of all-time players) don't dance."

Abdul-Jabbar has no patience for people who don’t tow the government/Dr. Fauci line on COVID-19 either, prompting further criticism of James. This came after James posted a Spider-Man meme to his Instagram account showing three Spider-Man characters wearing the labels of "COVID," "cold" and "flu."

That was a "blow to his worthy legacy," Abdul-Jabbar said, because the "implication is that LeBron doesn't understand the difference among these three illnesses, even after all the information that's presented in the press."

Despite the criticism, Abdul-Jabbar on Sunday night walked back his remarks as “blown out of proportion” and said he’s also expressed deep admiration and respect for LeBron “as a community leader and athlete. That hasn't changed and never will."

Abdul-Jabbar said he’s all for James breaking his NBA career scoring record. Nevertheless, he could not bring himself to slam James for one of his most egregious inconsistencies. James earns a lot of money from China and refuses to call out that nation for its human rights abuses. James is a situational social justice warrior, and Abdul-Jabbar overlooked that.

Furthermore, Abdul-Jabbar remained silent when James made the sensational and totally false remark that blacks are hunted every day by police officers.

The former Lakers center, Abdul-Jabbar attended the team’s game Sunday in order to award Carmelo Anthony the NBA’s Social Justice Champion award for 2021. Now known as the Kareem Abdul-Jabbar Trophy, the 2022 winner will be revealed during the NBA playoffs and will receive a $100,000 donation from the NBA for a social justice organization of his choosing.

This morning, Magic Johnson and Stephen A. Smith praised James to the hilt on ESPN’s First Take program.