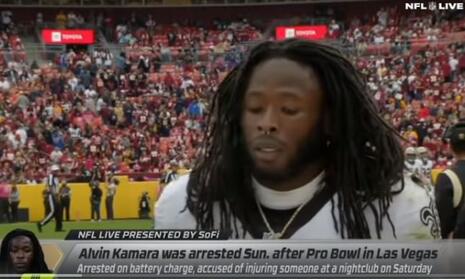 The New Orleans Saints should be thinking “running back” in their preparation for the 2022 NFL draft. Their star runner, Alvin Kamara, deserves to be sent down the river for a long time after savagely beating up a man in Las Vegas Saturday night. He may not get a severe sentence, but he darn well receives one. In fact, his merciless attack was caught on video, as was former Baltimore Ravens’ running back Ray Rice’s knockout punch of his fiancée in 2014.

Video surveillance captured Kamara punching the victim, Darnell Greene, eight times. Kamara’s friends stomped on him several times as he lay unconscious on the floor. Greene suffered an orbital fracture to his right eye and other injuries, according to the police report.

Kamara played in the NFL Pro Bowl game the following day. After the game, Las Vegas police questioned him, arrested him on a battery charge resulting in substantial bodily harm and took him to jail. He was soon released on a $5,000 bail. Which seems ridiculously low given the despicable crime he committed. Rice’s crime ended his career. Kamara’s crime hasn’t reached that point yet, but that should strongly be considered by the National “Felons’’ League.

ESPN reported the victim said he engaged in conversation with a woman waiting for the elevator as he was leaving the Cromwell Casino at Drais After Dark Club. The elevator door opened, the man attempted to get on it, but a man later identified as Kamara stopped him by physically putting his hand on the victim's chest. Greene said he attempted to remove Kamara’s hand from his chest, but the 215-pound football player pushed him backwards, causing him to stumble.

That’s when Kamara’s punching and the other people’s stomping began, causing Greene to lose consciousness.

Video shows the victim speaking to a woman, Kamara pushing him and others punching him in the face. “Then Kamara lunged toward the man and punched him approximately eight times -- including three times after he had fallen to the ground,” ESPN reported. Three people stomped the man in the face, chest and legs. “One of Kamara's associates stomped him about 16 times, according to the police report.”

Security personnel then arrived and escorted the violent Kamara group out of the casino and off the property. There was a delay in arresting the wild, out-of-control Kamara because the victim needed treatment before giving a statement to police.

Kamara claimed Greene insulted one of his friends and threatened a person. He also claimed the man was trying to get away, “so he chased him and punched him several times.” The video demonstrates the victim did not attempt to run away. Kamara was read Miranda Rights and arrested 18 minutes after the Pro Bowl game ended Sunday.

Mike Florio, of NBC’s Pro Football Talk, said Kamara “could be in extra-deep trouble with the league over this. It’s one thing for a player to run afoul of the law on his own time. Kamara was in Las Vegas on NFL business. While he was technically doing his own thing a day before the game, the league surely won’t take kindly to a player being involved in this kind of thing while in Las Vegas for a league event. … Kamara definitely has a problem, both with the authorities and with the authority of the Commissioner.”

This is no time for NFL Commissioner Roger Goodell to go wobbly, as he initially wanted to do with Ray Rice eight years ago. The Ravens released Rice, and he never played in the league again. Goodell needs to throw the book at Kamara, the league’s 2017 Offensive Rookie Of the Year and now the league’s most offensive thug.

After all, the public needs protection from NFL brutality and violent athletes who cannot restrain themselves with civility.