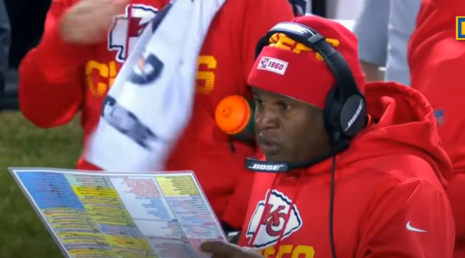 Because of Bieniemy’s success as KC’s offensive coordinator, he is an annual favorite among sports media to ascend to a head coaching position. There is currently only one black head coach in the NFL. Which makes “Eric Bieniemy season” more of a focal point this year than ever before. There are several open jobs currently, and the media is demanding he land one of them.

Stephen A. Smith is one of those who is outraged that this week Denver hired a new head coach not named Bieniemy. A white coach, no less.

“It’s just a damn shame when I see something like this,” Smith screeched on yesterday’s First Take program. “In regards to Eric Bieniemy and his resume, and then you put that up against Nathaniel Hackett’s resume.”

Hackett is the white guy just given the reins to coach Denver. He was previously an offensive coach for Green Bay.

“You just scored 10 points in an NFC Divisional playoff game,” Smith said of Hackett, referring to the Packers’13-10 loss to San Francisco last week. “And a couple of weeks later you get a head coaching job, but Eric Bieniemy with those qualifications doesn’t get the job. I’m telling you right now, as a black man, it is sickening, it is insulting, and it bothers the living hell out of me.”

This is what you get every winter during “Eric Bieniemy season," when the KC assistant is held up by media as the greatest black head coaching candidate for any open NFL job. However, since he’s been passed over numerous times, there are suspicions that Bieniemy just doesn’t interview that well. Denver did interview him, and he had five interviews last year.

Also, some suspect that Hackett may have been hired to lure quarterback Aaron Rodgers to the Broncos via a potential trade later on.

Pro Football Talk’s Mike Florio calls the “bad interview” theory “BS. As one source with knowledge of the situation explained it to PFT over the weekend, Bieniemy did a great job in last year’s hiring cycle. And he continues to improve, as he receives (and he has) specific feedback on how to make his presentation even better.”

Fox Radio’s Doug Gottlieb commented that, during interviews, Bieniemy does not offer a lot of details about what he would offer as a head coach. If true, this may be holding him back, rather than his race.

Still, others believe Bieniemy’s rap sheet stands in the way of a head coaching job. He was arrested for a 1998 Colorado bar fight, a 1993 assault on a woman and a 2001 DUI charge.

A year ago, the ESPN Undefeated race baiter Martenzie Johnson alleged black assistant coaches must work twice as hard as whites to get head coaching jobs. He also wrote that when offensive coordinators like Bieniemy succeed, the “goalposts” for their advancement get moved back.

All these criticisms of NFL hiring procedures explain “Eric Bieniemy season” to a T.