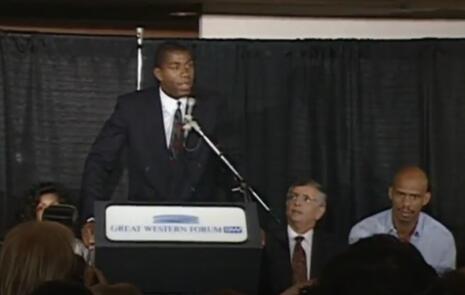 Sunday was the 30th anniversary of Magic Johnson’s shocking announcement that he had HIV and was retiring from pro basketball. With NBA Commissioner David Stern and Kareem Abdul-Jabbar by his side, Johnson immediately volunteered to become a spokesperson and poster child for the virus.

Then and now, he was hailed as a sympathetic figure. In 1991, Sports Illustrated quoted him saying he had been merely “accommodating needy women”. Now SI praises him for “still doing lifesaving work.”

Chris Herring wrote Saturday that Johnson’s retirement marked “one of the biggest, most impactful moments for public health in generations. His diagnosis not only opened people’s eyes to the nature of the disease, but over time—with proper management and treatment—illustrated the virus didn’t have to be a death sentence. Now, three decades later, Johnson continues to use his platform to make a positive impact.”

Ten months after his retirement, Johnson would withdraw from the National Commission on AIDS. He accused the George H.W. Bush administration of failing to solve the problem. The man whose reckless behavior resulted in HIV rebuked the president for dropping the ball.:

(Y)our administration has not done what it could and should to address a situation which, day by day, poses an increasing danger to the well-being of millions of Americans, and which threatens to cast an even wider pall across our nation.

Dr. Nina Harawa, a UCLA professor of medicine and epidemiology, whose research focuses on care and treatment for HIV and other sexually transmitted diseases, asks herself, “ ‘Can we have another Magic?’ And by that I mean, is there someone that the younger people can relate to? …”

The Sporting News editorialized in 1991, “Why couldn’t all our athletic stars be just like Magic?”

Johnson said Sunday that God has blessed him by keeping him alive. We will never know the fate of his many sex partners. Have any of them died of HIV? Did he ever apologize or tell any of them of his disease? Ethics and morality are seriously lacking from this ongoing story.

The fawning media and medical fanboys and girls ignore how Johnson got to this place. There is no talk of the married man’s faithlessness and his lack of discipline and restraint. Most importantly, there is absolutely NO consideration for the multitudes of women he may have infected with HIV. In comparison, another former athlete who took the high road sexually, Tim Tebow, is mocked and scorned.

In 1991, The Sporting News reported that Johnson’s closest friends said he frequently disclosed details about the “freaks” he had sex with across the nation.

A 2010 story by NBC Pro Basketball Talk quotes Bob Wolfley, of the Milwaukee Journal-Sentinel, reporting on the Lakers’ locker room serving as a regular place of sex romps:

“The team’s locker room, and its sauna, had been a place where the star and other players had entertained women, even right after games. Johnson would retire to the sauna after a game, have sex, then put on a robe and return to the locker room for his postgame media interviews.”

NBC’s Kurt Helin reported that Johnson admitted to more than 300 sexual partners a year and contracted HIV because of it. But, yawn, “Everyone has moved on from this. Aside being titillating, this tells us nothing new.”

In a bygone era, Lou Gehrig contracted a fatal disease through no fault of his own. Magic Johnson lived the life of a stray dog and reaped what he sowed. Unfortunately, the media has a blind spot with Johnson and refuses to tell the full story.