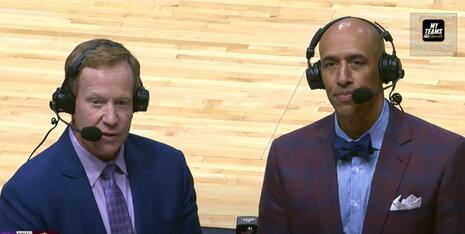 Free speech and former Sacramento Kings’ radio voice Grant Napear will get their day in court. During the Black Lives Matter blitz in 2020, he was fired for Tweeting the phrase “All Lives Matter”, and now he’s suing his former employer, Bonneville International, for “wrongful termination.”

Napear is best known for calling Kings’ games for 32 years and for serving as a substitute host for the Jim Rome Show. In May of last year, he responded to a Twitter question on BLM from former NBA player DeMarcus Cousins, saying: "Hey!!!! How are you? Thought you forgot about me.  Haven't heard from you in years. ALL LIVES MATTER...EVERY SINGLE ONE!!!" 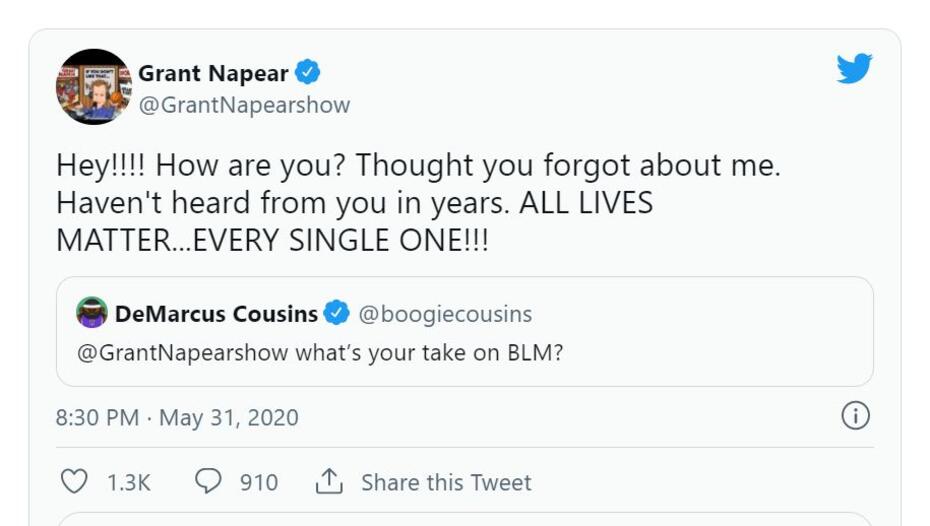 Free country, free speech, right? Shouldn’t we all value everyone’s life, no matter, color, race, religion or creed? Not so in the land of the free during the toxic BLM climate following the George Floyd killing.

Napear (in photo at left with former broadcast partner Doug Christie) was “allowed to resign” from his play-by-play job with the Kings on the same day,” Sacramento’s Fox 40 TV station reported. How generous of his Bonneville International employers.

Bonneville International released this statement announcing Napear had been dismissed. "While we appreciate Grant’s positive contributions to KHTK (the Kings’ flagship radio network station) over the years, his recent comments about the Black Lives Matter movement do not reflect the views or values of Bonneville International Corporation. The timing of Grant’s tweet was particularly insensitive. After reviewing the matter carefully, we have made the difficult decision to part ways with Grant."

The Napear lawsuit charges his former employer with wrongful termination, discrimination and retaliation. It could also include fear, groupthink and mindless stupidity.

The legal complaint says no one from Bonneville International told Napear he was “terminated for material dishonesty, misconduct or any conduct that might discredit the goodwill, good name or reputation of the company.”

“It’s super crystal clear that the folks out in Salt Lake City (the location of Bonneville International’s corporate office) made a hasty and wrong-headed and discriminatory decision when they made this decision to terminate Grant. There was no investigation,” Napear’s attorney commented.

Napear’s suit seeks damages, but he said his reputation is the most important thing he wants to reclaim: “I want my name restored. I want to be vindicated.”

We’ll see if Bonneville International’s attack on free speech will stand up to a full-court legal press. We will also learn whether or not its attack on free speech will become a hallmark of the foolishness and cowardice that gripped corporate America during the BLM madness of 2020. Rather than challenge the First Amendment, Bonneville would be wise to settle out of court.