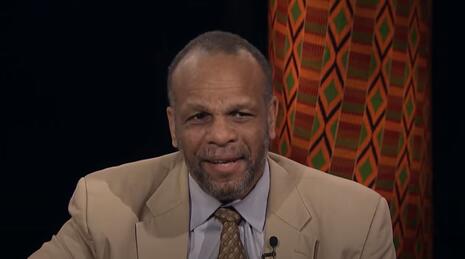 Two of the most extreme race-baiters in sports media reflected on the one-year anniversary of George Floyd’s death this week. William C. Rhoden, of The Undefeated blog, and Carron J. Phillips, of Deadspin, are embittered that last year’s over-the-top woke corporate and sports activism has waned.

Rhoden (seen in above photo) recalled that pro sports leagues took “dramatic measures” last year over Floyd. Particularly NBA players and coaches in their fan-less bubble. Now he fears that the time when “Everything black was a go” was no more than “pantomime.”

“Even NFL commissioner Roger Goodell rhapsodized about the importance of Black lives, especially in the NFL,” Rhoden opined. “There was little pushback because there were no fans inside the arenas to hiss and boo."

“Now there are fans in the stands, and we see a change. We seem to have gotten back to normal. Little to no Black Lives Matter signage is seen around arenas, and certainly not on the court.”

Rhoden is horrified that athletes are again standing during the playing of The Star-Spangled Banner. “It’s as though the league has given in to the gravitational pull of racism and white supremacy where racism is only acknowledged when it is blasted in our faces, as it was with Floyd.”

We never get to the core of racism, Rhoden says in disgust.

The Dallas Mavericks refused to play the national anthem at the start of the current season. However, the league then ordered it to be played. Rhoden said of that: “For some, the song and the flag represent patriotism. For many others, the flag and song represent oppression and hypocrisy. So why play it? … It doesn’t represent one ideal.”

Attending NBA games at Brooklyn and at Madison Square Garden in New York a few nights ago, the bigoted Rhoden wondered “How many of these fans participated in the Capitol riots on Jan. 6? How many wished they had? How many sympathized with the rioters? How many, despite overwhelming evidence to the contrary, believe that the election was stolen? How many sympathize with the officer who murdered Floyd? Do Black lives matter any more now than they did a year ago, or do they only matter when hitting game-winning shots?”

Phillips lambasted the NFL for a Floyd anniversary statement that says, in part: “ ... Our thoughts are with the Floyd family and all who have been affected by his death. This has been a year filled with reflection and reckoning.”

Those words are the “most infuriating part of the statement, as they lack accountability in how much of a role the league played in how bad race relations have gotten over the last five years,” Phillips ranted.

The blackballing of former NFL players Colin Kaepernick and Eric Reid “was the gasoline and match that Trump and his supporters needed to march through the streets of Charlottesville and storm the walls of the U.S. Capitol,” Phillips continued. “But now, all of a sudden, the league has sympathy for ‘all who have been affected’ by Floyd’s death, as if every Black American doesn’t have their own police brutality tale that has ‘affected’ them. Reflections and reckonings mean nothing when they show up hundreds of years after the fact.”