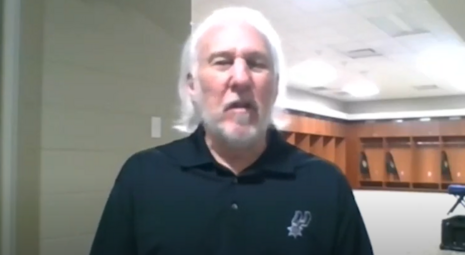 Following Sunday's police killing of Daunte Wright in Minneapolis, San Antonio Spurs Coach Gregg “Pop” Popovich let loose with another of his anti-Republican eruptions. The Trump hater denounced deplorable NBA owners who donate money to Republicans opposed to gun control and defunding the police. All the while, the NBA continues to demonstrate its fealty to the concentration camp-running Chinese Communist Party.

The Spurs coach and gun control advocate said of Wright: "It just makes you sick to your stomach. How many times does it have to happen? [...] That individual is dead. He's dead. His friends and family are grieving.

"How many young Black kids have to be killed for no fricking reason? How many? So that we can empower the police unions? … And we just keep moving on. As if nothing’s happening. … I think we’re already in the process of being Rome. It’s over unless we find some leadership and some commonsense and find some people that can steer us in the right direction."

Popovich and Cancian then took aim at Republicans -- NBA owners among them -- trying to preserve the Second Amendment:

"The people who continually fight to maintain the status quo are not good people. ... Our governor in Texas, Gov. (Greg) Abbott. It's deplorable. It’s almost impossible to listen to this man speak. You know the other day when guns came up, he actually made the statement again, the old trite myth argument ‘They’re coming for your guns.’ … Nobody’s taking away anybody’s guns, and he knows it. So he’s a liar. … He’ll do whatever he has to do to follow the lead of Donald Trump and the rest of the Republicans.

"We need to find out who funds these people. I want to know what owners in the NBA fund these people who perpetrate these lies. Maybe that's a good place to start, so it's all transparent."

Cancian obliged Popovich and turned the focus away from the late Wright and onto Republicans opposing gun control. “According to data from the Federal Election Commission, NBA owners donated a combined $14.9 million to Republican politicians overall in the 2020 election cycle,” Cancian wrote.

Before angrily stomping out of the virtual press conference, Popovich also blasted Republicans for perpetuating “the big lie” about election integrity and for being complicit in the Jan. 6 incident at the U.S. Capitol. He accused Trump and Republicans of being responsible for COVID-19 deaths and fighting vaccines. And basically ruining the country.

Any more questions about why the NBA has an arctic -5 percent favorability rating among Republicans?