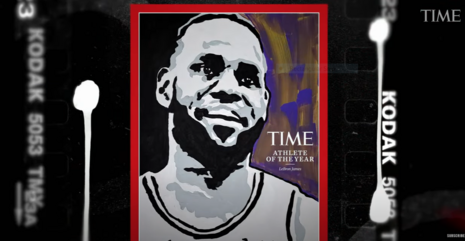 To no one’s surprise, LeBron James is Time magazine’s athlete of the year and one of Sports Illustrated’s sportspersons of the year. James had another big year of championship basketball, but this award is every bit as much about social justice as it is about the Lakers championship and James's stat line.

Ian Casselberry, of the Awful Announcing blog, notes, “The magazine highlighted him launching More Than a Vote, a nonprofit organization dedicated to getting more Black voters to the polls and the effort to provide more polling places for potential voters, such as converting NBA arenas into massive polling stations to accommodate greater numbers.”

One of those massive polling centers was State Farm Arena, home of the NBA’s Atlanta Hawks and the infamous suitcase ballots.

Sean Gregory, a Time mag colleague of Casselberry’s, wrote that “James took a leading role in the effort to draw attention to racial violence throughout the country, spurring awareness and activism to the killings of young Black people like George Floyd, Breonna Taylor, and Jacob Blake.

“It was the highest-profile example of the surge in activism that spread across the sports world in 2020.”

What’s left unsaid here by the Time writers is that high-profile athletes like James and others, through their protests and boycotts, glorified criminals and contributed to anti-police sentiment across the nation.

Sports Illustrated (SI) selected James as one of its Sportspersons of the Year, along with four other activist athletes.

SI editors said that in the backdrop of the pandemic, George Floyd's death and an ugly presidential election, James worked tirelessly against voter suppression. He chose the braver path in his work “to bend the arc of history”:

… If there is brightness in this dark year, it’s the leadership—and sorely needed optimism—shown by some of the nation’s top athletes in facing down our many challenges.

And so our Sportsperson of the Year award goes to five men and women who in 2020 were champions in every sense of the word: champions on the field, champions for others off it.  …

Besides James, SI Sportspersons of the Year are: Kansas City Chiefs quarterback Patrick Mahomes, who urged people to recognize the (Marxist) Black Lives Matter movement; Tennis star Naomi Osaka, who “found her voice in the fight against social injustice”; the WNBA’s Breana Stewart, who “spoke loudly” against injustice; and former KC Chiefs lineman Laurent Duvernay-Tardif, who left the NFL to join the front lines of the battle against COVID-19.

SI says the four latter athletes are all under 30 and early in their activist journeys. James is 35 and had found his social and political voice long ago:

“There is debate over whether he’s (James) the greatest NBA player ever. But with his efforts for racial justice, education reform and Black community empowerment as well as his voting rights campaign and varied charitable work, there is no doubt that he sets the standard for the modern socially conscious athlete. It is for his career-long dedication to service that Sports Illustrated also honors him with this year’s Muhammad Ali Legacy Award. ‘He continues to embody Muhammad’s principles and core beliefs, using his celebrity platform to champion social justice and political causes that uplift all people,’ says Lonnie Ali, the Greatest’s widow. ‘LeBron has actively used Muhammad’s example to guide, inform and inspire him along this path.’ ”

The five winners of the SI Sportsperson of the Year awards are each fittingly praised by a fellow woke athlete. James is honored by the written words of Kareem Abdul-Jabbar, Stewart by Megan Rapinoe, Mahomes by Doug Williams, Osaka by Martina Navratilova and Duvernay-Tardif by swimmer Jenny Thompson.

The key take-away from all this woke madness is that social justice is now the defining standard serving as the media’s basis for determining annual awards. It’s also one that is driving television viewers away from sports.