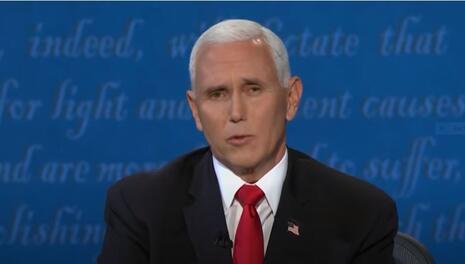 The Deadspin sports blog could easily pass as "Democrat Spin" with three current stories featuring mean-spirited attacks on Republicans. Vice-president Mike Pence is portrayed as a "giant pile of crap" after appearing in Wednesday's debate, Republicans in Wisconsin are accused of engaging in voter suppression and NFL owners donating to Republicans are vilified.

VP Pence was on the receiving end of the most venomous attack by Deadspin. Jesse Spector relished the fact that a fly landed on his head during the debate with Democratic VP candidate Senator Kamala Harris (D-CA):

"Flies are attracted to giant piles of crap, so it’s not a surprise that one landed on Mike Pence’s head during Wednesday’s vice presidential debate.

"The fly sat on Pence’s head for two minutes, providing a welcome distraction from the vice president speaking over moderator Susan Page to proclaim his unending support for law enforcement and school choice, just a small sampling of the series of dog whistles he spent the night blowing."

Pence is also described as "so full of shit" for walking out of an Indianapolis Colts game in 2017 after players kneeled during the national anthem.

Dustin Foote's story criticizes Wisconsin election officials, conservatives and Republicans for alleged voter suppression: "Nearly a week after Wisconsin Republicans took aim at the Bucks’ and Brewers’ plans to use mascots to get out the vote, election officials in Milwaukee have now thrown out plans to use the Bucks and Brewers stadium for early voting, altogether, citing legal concerns."

Voters in Milwaukee, the most racially diverse city in Wisconsin, will not be allowed to use the Bucks' arena or the Brewers' stadium for early-voting and absentee ballot drop-off sites. "In Green Bay, a smaller, whiter, and more conservative district, voters can cast their vote directly outside Lambeau Field on election day," Foote said.

The Milwaukee sports venues hatched their plan September 1, well after the Wisconsin Elections Commission's June 12 deadline. Any ballots cast at these proposed venues could have been challenged and nullified. Sure enough, that's voter suppression, Foote alleges. Further proof? Blacks in Wisconsin have previously faced long lines at voting polls, too. "This is what voter suppression looks like," Foote claims.

"Wisconsin Republicans do not seem to have a problem with Green Bay using Packer facilities for election day voting," says Foote, noting Title Town is located in the conservative stronghold of Brown County.

The long, hard day of GOP bashing ends with Spector's guilt-by-association shaming of a cabal of NFL owners who -- thanks to President Donald Trump's "derelict ignorance" -- have created "superspreader" sports events by opening their stadiums to fans.

Cleveland Browns owners Jimmy and Dee Haslam donated plenty of money to the "death cult that is the Republican Party," Spector writes. They've donated more than $100,000 to the National Republican Congressional Committee (NRCC) and $50,000 to the Standing With Conservatives PAC, among other contributions.

Janice McNair, widow of the late Houston Texans owner Bob McNair -- of "we can't allow the inmates to run the prison" fame -- gave $203,400 to the NRCC.

Miami owner Stephen Ross gave a million bucks to the Trump inauguration, and "after Republicans in the Senate voted to keep Trump in office," shot $70,000 over to the National Republican Senatorial Committee. Along with $38,000 to a conservative PAC in Florida.

Spector includes Carolina owner David Tepper in his list as well. In 2016, Tepper gave $750,000 to conservative SuperPAC New Day for America and supported Sen. Marco Rubio, but he is "against the outright lunacy of Trump."

"It doesn't appear to be a coincidence that some of the teams that have been most aggressive about reopening their stadiums to fans, particularly the Cowboys and Jaguars, have owners who have been big financial boosters of the country's most prominent pandemic bungler, the one who says not to let the virus dominate, and to get out there," Spector concluded.