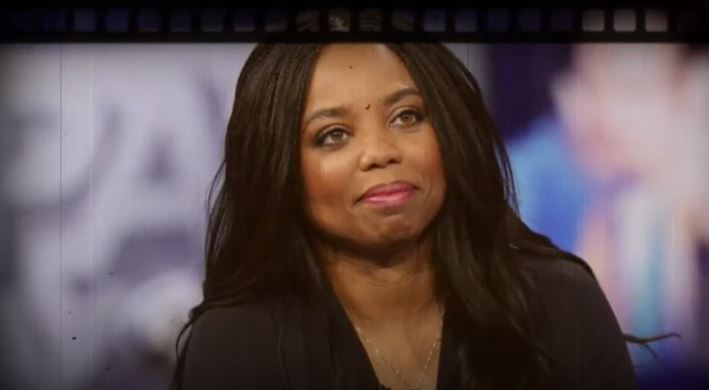 As a teenager, Justin Rohrwasser had a symbol tattooed on his arm that has since been adopted by a white supremacist group. The former college place-kicker was drafted by the New England Patriots over the weekend, and said Saturday he does not associate with that group and he will cover up the controversial tattoo. Not good enough, says Jemele Hill, who's refusing to accept his denial of racism.

In 2018, Hill tweeted her way right out the door at ESPN for having called President Donald Trump and his supporters "white supremacists" and additional social media blunders. Since she's only written three articles all year for her current employer, The Atlantic magazine, she's had ample time to use Twitter as her poison pen of choice. She's not buying Rohrwasser's line, according to her Twitter comments: 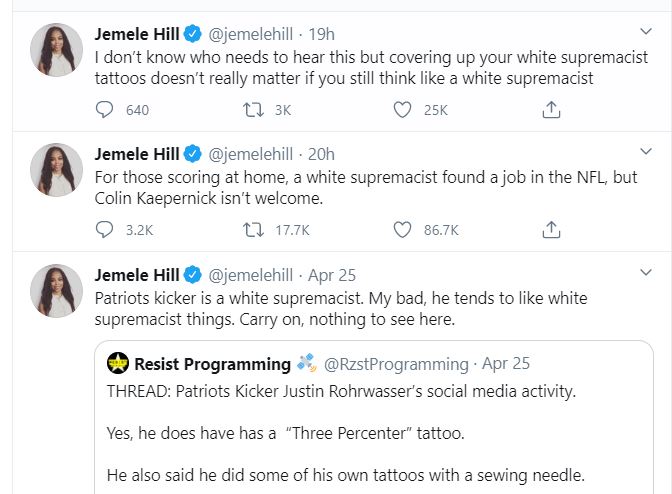 During a conference call with sports reporters, Rohrwasser said, "I got that tattoo when I was a teenager and I have a lot of family in the military. I thought it stood for a military support symbol at the time. Obviously, it's evolved into something that I do not want to represent.

"When I look back on it, I should have done way more research before I put any mark or symbol like that on my body, and it's not something I ever want to represent. It will be covered," said the man who kicked 33 field goals and scored 178 points in his two-year kicking career for the Marshall University Thundering Herd.

As "judge" and "jury," Hill is not to be confused with the facts; her mind is made up. Rohrwasser is a white supremacist and the case is closed.

Another left-wing media source, The Root, posted a story on Rohrwasser with the sarcastic headline: "Patriots Draft Pick Has Right-Wing Paramilitary Gang Tattoo. But It's OK, He Didn't Know What It Meant". Michael Harriot's story begins: "And with the 159th pick in the 2020 NFL draft’s fifth round, the New England Patriots select...the right-wing, paramilitary-supporting kicker from Marshall.

"As soon as the Patriots’ Trump-supporting coach and owner gave Rohrwasser the nod, Resist Programming noticed that the draftee’s social media history seemed to show an affinity for far-right zealots like Jordan Peterson, an opponent of transgender pronouns and the feminization of men."