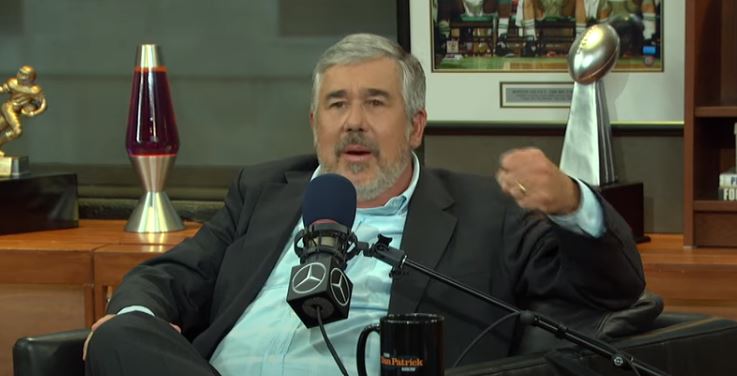 Sports Illustrated writer and podcast host Jimmy Traina on Monday tried to goad retired ESPN SportsCenter host Bob Ley into a broadside attack on President Trump and met with mixed results. Traina said the president is doing "long-standing" damage to the nation, and before veering off the political angle of COVID-19, Ley directed the words "criminal negligence" in the president's direction.

Traina introduced Ley (in photo), one of the original on-air sportscasters from ESPN's early years, by trying to lead him into a joint attack on Trump:

"I don't want to do a whole political Donald Trump thing and it's not fair to put you in that position, but given your journalistic background, given your integrity, given what you've done on the air for 40 years ... I'd love to have this conversation even if it's briefly, even if you don't -- we don't have to, but for me personally what I've always said is the long-lasting damage Donald Trump is going to do, I don't know how we recover from that, but the fact that he's convinced so many people that what they see with their own eyes and hear with their own ears is not true. I don't know how we recover from that. Um, do you want to address that or would you like me to move on?"

Ley responded with a long-rambling reply, initially sounding a non-partisan tone. Then he talked about following Radio Free Cuomo before likening President Trump to a criminal and discounting the importance of sports during this pandemic.

"If you're pissed off about the political situation, decisions made or unmade about this side or that side, don't spend that energy being angry now," Ley started. "Spend it in November. It's called an Election Day when you can express your approval, disapproval and channel that energy into understanding wherever you live science matters. ..." Then the gloves came off with Ley:

"Well look ... I'm jumping in with two feet because I'm retired. You're talking to a Reagan Republican. I've never voted in my life for a Democrat. And I didn't vote for this Republican, in whatever name he was. And, um, I just can't believe the criminal negligence we're seeing. But ... we have to be focused on what's on the other side of society. ..."

Ley tells Traina that he's touched on something and says he's spoken with a friend about what are we leaving our children. "And I'm not talking materially for those of us who are blessed with resources and assets. I'm talking about institutionally in our society," Ley says.

Later in the podcast interview, Ley circles back around to politics again. He said something that critics of ESPN have chronicled so well: its left-wing partisanship so well over the years, and that his friends at ESPN have strongly held beliefs. Ley recently watched a program produced by those friends featuring 10 great moments in professional wrestling.

ESPN "adroitly avoided any mention of Donald Trump when he was involved with (Vince) McMahon (the CEO of WWE), which was quite the accomplishment," Ley said of the pro wrestling program.

Before the podcast ended, Ley questioned the distribution of health care in America and asked if we are living under the Articles of Confederation. Nevertheless, after veering in and out of politics, Ley said that if the current times are not about keeping your family safe then you need to hit the re-set on your priorities.