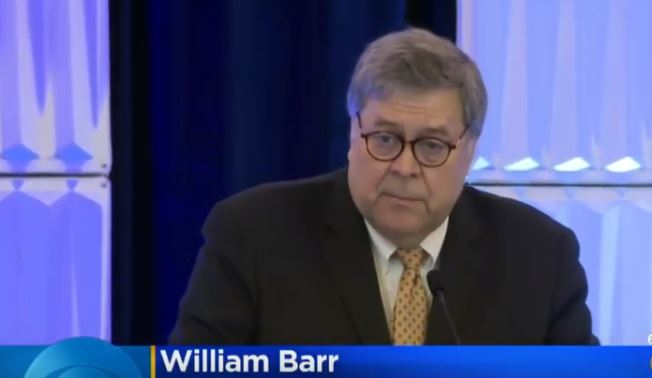 U.S. Attorney General William Barr is so far behind the times and the Obama-era dictates on transgenders. The Trump Administration "bigot" thinks boys are boys and girls are girls and had the audacity to lend his legal opinion to an Alliance Defending Freedom (ADF) lawsuit challenging Connecticut's policy allowing "transgender" boys to compete in girls' sports.

On behalf of the U.S. Department of Justice (DOJ), Barr (seen in photo, right) filed a brief this week supporting the plaintiffs in a federal civil rights lawsuit. The three girls who filed the suit claim Connecticut’s policy allowing trans boys to compete in girls sporting events denies them athletic opportunities, hurts their athletic scholarship potential and is discriminatory. Barr's brief states:

“Under CIAC’s interpretation of Title IX, however, schools may not account for the real physiological differences between men and women. Instead, schools must have certain biological males — namely, those who publicly identify as female — compete against biological females. In so doing, CIAC deprives those women of the single-sex athletic competitions that are one of the marquee accomplishments of Title IX.”

Barr's statement of interest opposes Connecticut Interscholastic Athletic Conference (CIAC) policy allowing boys to dominate girls sports. At the center of the controversy are two high school boys ― Andraya Yearwood of Cromwell, Conn., and Terry Miller of Bloomfield, Conn. — who are running in girls' track and field sprints and setting state record after state record. Real girls are also-rans in their own sport.

The DOJ’s legal brief runs counter to the Obama Administration's position that the emperor is wearing new clothes ... and that the emperor identifies as a female. Barr's DOJ argues what people who aren't running cover for the LGBT agenda can clearly see: trans girls are not girls, but biological males who publicly identify as female.

CIAC Executive Director Glenn Lungarini defended his state's policy because it was written in conjunction with, who else, but Obama Administration officials. The Obama DOJ also claimed the term “sex” in Title IX is ambiguous and protects trans students. Get real! The people who wrote Title IX in 1972 had no intention of blurring the lines of gender!

That should have settled the matter, but Ennis has another big arrow in her quiver. She's quick to point out that plaintiff Chelsea Mitchell, of Canton, Conn., defeated the boys twice in the first eight days after filing the lawsuit.

If that smells like a can of stale sardines, though, it's because it's fishy as all get-out. Right after a lawsuit is filed saying state trans policy put girls at a disadvantage, these boys, standing taller and more heavily muscled, can't beat the skinny little girls anymore?

Something's rotten in Connecticut. Had no lawsuit been filed, you can bet your bottom dollar the boys would have kept consistently beating the girls. Did these boys take a dive for the LGBT movement? In an attempt to undermine the girls' lawsuit? No need to answer either question.

ADF attorney Christiana Holcomb said Wednesday that “Males will always have inherent physical advantages over comparably talented and trained girls — that’s the reason we have girls sports in the first place. And a male’s belief about his gender doesn’t eliminate those advantages.”

Ennis calls that "transphobia" and quoted the ACLU alleging, “History will look back on these anti-trans attacks with deep regret and shame."