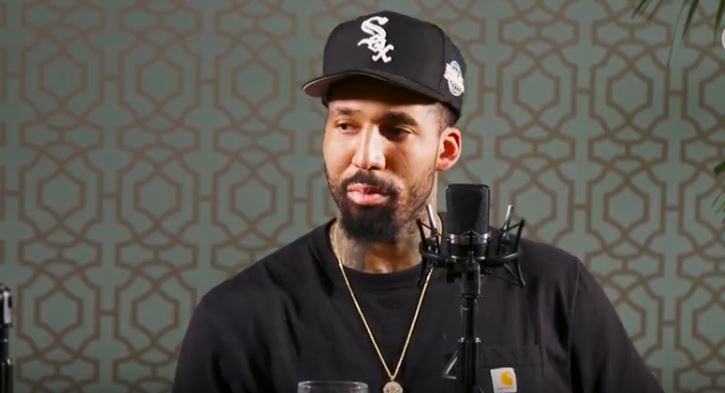 The Nation magazine sports editor Dave Zirin positions his blog and podcast as representative of the "Edge of Sports." Make that the extreme, far left edge of sports. The socialist Zirin is a hardcore Trump hater who, in this week's podcast, focused on the theme of Trump-as-racist for referring to COVID-19 as a Chinese virus. Even though it originated in China and spawned a pandemic.

Zirin interviewed NBA veteran Wilson Chandler and asked him a series of leading questions to coax him into negative comments about President Donald Trump. Near the end of the podcast, Zirin gave his weekly "Just Stand Up Award" to former NBA player Jeremy Lin, who said the president's reference to a Chinese virus was racist.

In the Chandler (seen in above photo) interview, Zirin mentioned that the current member of the Brooklyn Nets once played pro basketball in China and asked, "I wanna know how you feel about .... you know, Donald Trump is trying to whip up all this anti-Asian racism in this country. And I wanna know how your experience playing in China has you reflecting on what Trump is trying to whip up right now."

Chandler replied that playing in China was a great experience and said: "It shouldn't come to this, makin' remarks, you know, uh, callin' it the China virus. That's just like ignorance."

Zirin also asked Chander if he could say one thing to Donald Trump, what would it be? Chandler answered:

"I have to take him serious, but at the same time I don't take him serious. ... he's a distraction from us comin' together as people, and he's, like, tearin' the country apart. ... We just need to get him the fuck outa office."

"Exactly," Zirin said after getting the inflammatory attack on the president he was seeking.

Earlier in the interview, Zirin didn't get quite the anti-Trump venom he'd hoped for when he asked Chandler what he would do "to put this country on the right track and moving in the right direction." Chandler said he isn't even political, then danced around the Trump topic and instead delivered a social justice warrior's wish list.

"I think, with the resources this country has, I think a lot should be given, like free health care," Chandler started. "And I know that's a tricky thing to do. I feel like free education to a certain extent. I feel like the whole prison system is fucked up. And being a black person from a town that is robbed of its resources and not havin' much for education, low income ... and things that happened to us over these few hundred years. We definitely been lowered, like lower class ... so I definitely would try to correct that whole thing with, uh, reparations stuff. ... Cut taxes ... something should be done."

Chandler called all that "doubling down" on his faith. Whether he realizes it or not, he's definitely plugging prosperity ministry.

Zirin typically looks for bad things to agitate about, and he informed listeners that Chandler is a native of Benton Harbor, Michigan, which "actually has its history of rebellion against police brutality."

Chandler agreed it's a racist town where they closed schools and prevented kids from getting a good education.

After the interview, Zirin praised Lin, who last week tweeted:

Neither Zirin or the Chi-coms could have said it better. The Chinese didn't get any kudos from Zirin, but the podcast host did give his "Just Stand Up Award" to Lin, currently a player for the Beijing Ducks of the Chinese Basketball Association.

"And it's very important that Jeremy Lin is speaking out," Zirin said. "It takes a lotta guts. Appreciate him doing it so much."