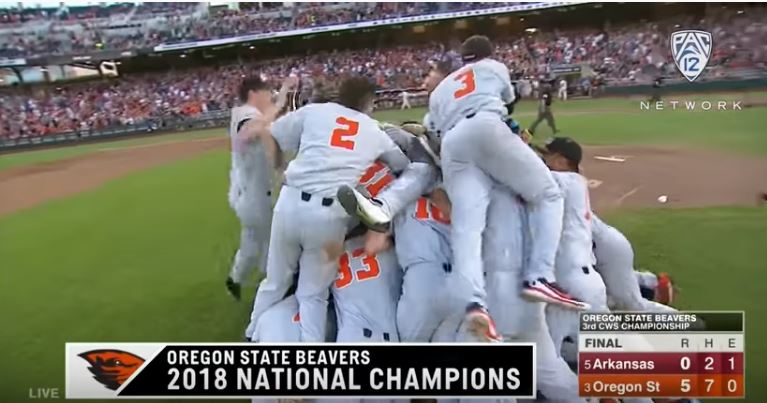 News has just come out that 2019 NCAA baseball champion Vanderbilt University whiffed on an invitation to be honored at the White House during a celebration of multiple college championship teams last week. But in an unusual "pinch-hitting" appearance, the 2018 national champion Oregon State Beavers did a last-minute "hit-and-run" to the nation's capital to celebrate their title with President Donald Trump.

Supposedly this was not a political snub by the Vanderbilt Commodores, who defeated Michigan to win the College World Series last June 27.

Vanderbilt spokesman Alan George issued a statement that the team “respectfully declined” to attend the college champions event Nov. 22 “due to long-standing travel plans for our student-athletes to return home for the Thanksgiving holiday.” That was six days before Thanksgiving, and Nashville is only 90 minutes flight time from D.C.

In 2018, the President did not host a reception for multiple national college championship teams. Oregon State had no reason to expect an invitation this year, 17 months after winning its national title. Yet the Beavers were able to assemble their team without much notice, travel 2,200 miles across the country and, with the exception of just one player from their championship baseball team, attend the recent White House event.

Pat Casey, the retired coach of Oregon State's 2018 title team, even made the trip to the White House, too. He Tweeted:

Ahead of the big event, Oregon State's vice-president of intercollegiate athletics, Scott Barnes, said, "This will be a wonderful life experience for our student-athletes and a well-earned opportunity to celebrate this significant achievement."

Beavers players presented Trump with a jersey during their visit. 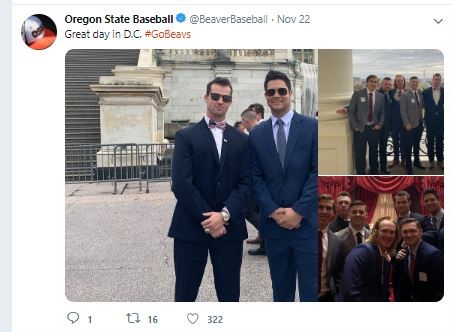 The Washington Post's Jacob Bogage and David Nakamura reported that media were confined to the State Dining Room, where just four of the 22 teams were positioned. They used the Vanderbilt story to re-hash past controversies involving sports teams that put politics before White House appearances. The Nov. 22 celebration for several teams "was not without controversy," they write.:

"Members of the Columbia coed fencing team wore large white lapel pins in a silent protest of Trump’s policies of “gender-based prejudice and partisanship,” and they planned to hand Trump a letter detailing grievances against his administration.

"Team captains told The Post in interviews that White House staff said Secret Service agents would prevent them from handing the president the letter, though the team did present Trump with a gift — a customary procedure for most championship visits. Photos from the event showed Trump interacting closely with athletes from other teams, including signing the tie of a Stanford gymnast."

The Post story also inserted a link to a story about Washington Nationals pitcher and activist Sean Doolittle declining an opportunity to join his teammates at another recent White House celebration to honor the World Series champs. His boycott was pointedly political, and he admitted, ‘'I don’t want to hang out with somebody who talks like that.'’