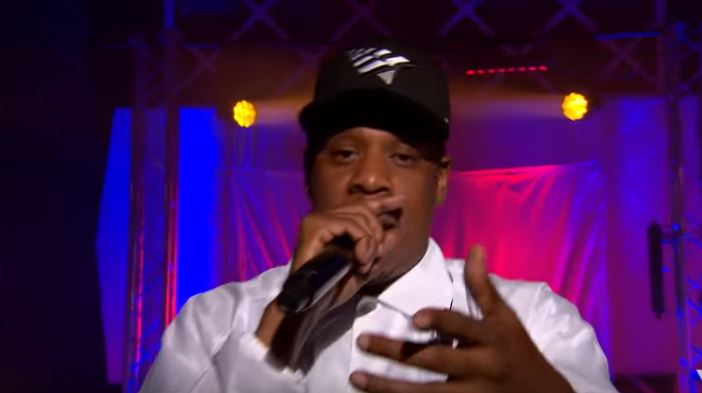 Without any NFL-style political correctness to protect them, three high school football coaches in New Orleans recently lost their jobs. The head coach and two assistant coaches at St. Augustine High School are now unemployed because their players were singing an N-word-laced fight song before their games. If that happened in the NFL, the commissioner who hired vulgar rapper Jay-Z to direct Super Bowl halftime entertainment would probably look the other way, writes New York Post sports columnist Phil Mushnick.

The New Orleans preps were singing the disgusting lyrics, “All I got is two pads. Two hands. Knock a n----’s s--t loose.” Head coach Nathaniel Jones and most of the students at St. Augustine's are African American.

It's hard to argue with Mushnick because, two months ago, "the NFL introduced the world famous, vulgar, N-wording, boastful, women-denigrating rapper Jay-Z (seen in photo above) as both its minister of social justice and sensitivity, and its consultant in choosing musical entertainment."

Mushnick suggests that Coach Jones's players were "surely inspired by acts and recordings such as those produced, performed and sold by Jay-Z." Remarkably, what doesn’t meet social and civil standards at a Louisiana high school has the full backing of Goodell’s NFL.

How could Goodell ever square the New Orleans coaches' firing with the kids whose behavior was emboldened by his pal Jay-Z? It's the same musical genre that emboldened them to chant disgusting racist words.

Mushnick asks if Goodell would instead issue a pathetic response like: "We here at the NFL, at the very top of football, clearly approve of and even reward those who would publicly and professionally chant, ‘Knock a n----’s s--t loose.’ ” Mushnick has a great question for Goodell that would expose him for hypocrisy and racial insensitivity:

"And why, if he’s so bold as to publicly hire, embrace and present X-rated rappers — two during the last Super Bowl halftime — won’t Goodell dare publicly recite their lyrics?"

After all, what wisely failed to meet social and civil standards of a high school in Louisiana has gotten the full stamp of approval from Goodell’s NFL.

The NFL is not unique in its trashy "entertainment," for as Mushnick points out, the NBA, NHL, Major League Baseball, universities and especially ESPN are exposing sports fans to "the most violent, garbage-spewing, crotch-holding, women-degrading, boastful rappers, many with criminal records, as essential confederates."

All of the above may be pandering to avoid charges of real or fabricated accusations of racism. Or, Mushnick theorizes, it could be due to "senselessly diminished standards" that explains why sports feature vulgar, racially, sexually and socially offensive refuse passing for entertainment.

Mushnick wants to know if sports leagues would lose one fan if filth was not part of the sporting event experience.:

"Would attention-starved Drake abandon the Raptors?

"Would there be one less eye on the Super Bowl if its halftime show designees first passed minimal civilized sanitary inspection? Why does any sport now feel impelled to tether itself to any form of music?"

Mushnick would like to see Goodell and NFL Minister of Music and Social Services Jay-Z take their private jets to New Orleans to explain to Jones why he is an ex-coach.

"Then they can explain it to the kids he coached. Then, finally, to us," Mushnick concludes.