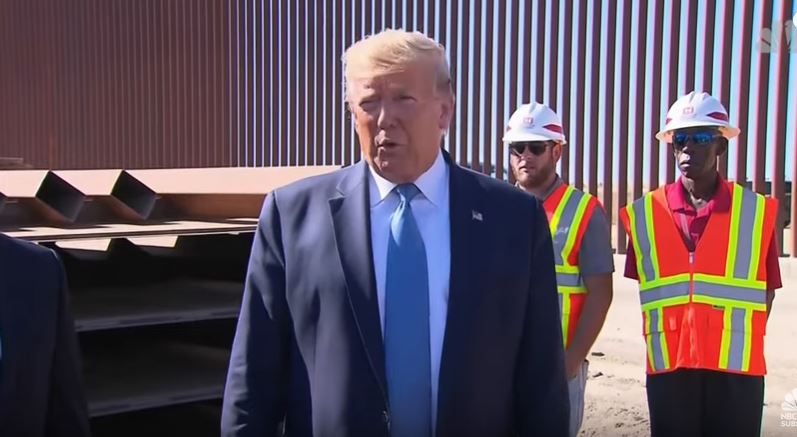 A climber who just happened to walk by a Kentucky replica of the southern border wall told the Deadspin sports blog it was fairly easy to climb the "very ugly symbol." With some egging on by Deadspin interviewer Giri Nathan, Peter Favaloro said people walking through desert heat could surely scale the wall, too.

Nathan set up the interview with Favoloro by taking strong shots at President Donald Trump and the wall.:

"Donald Trump is confident that the wall along the southern border—which was the central promise of his presidential campaign, and which is slowly, stupidly, expensively, illegally, taking shape—cannot be scaled. “We got climbers. We had 20 mountain climbers,” the president burbled last month. ... "

The president also said the wall can't be climbed; it's "very, very hard."

Nathan responded, "Other climbers, who exist and are not an instantly forgotten half-demented rhetorical prop, took Trump’s words as a challenge ... Curious parties, including an 8-year-old and an actively juggling man, have conquered the replica."

Scalable or not, the border remains "a brutal, militarized place," Nathan writes. "And the wall’s status as a rallying point for xenophobes has nothing to do with whether it can be solved by novices—but it is a little funny that this turned out to be the case ..."

Nathan spoke with Favaloro, a 30-year-old grad student and a self-described novice climber, over the phone. The two were clearly of one mind on the whole border issue.

It wasn’t a particularly grueling climb, Favaloro said. He admitted he was strapped into a safety device and without it, the climb "would have been a lot scarier. Because that’s the rope that’ll catch you if you fall. Right. So that’s definitely, you know—not to pooh-pooh the idea of climbing the thing. That said, still probably a lot less scary than walking all the way across the desert."

"You think it’s something that a novice climber could handle pretty comfortably?," Nathan asks.

"I’m a novice climber, and I handled it pretty comfortably," Favaloro boasts.

Nathan inquired if a non-climber also climb the wall. Yes, said the climber.

"Even if you accepted the premise that the border wall is something worth spending money on, how would you assess the specific execution of it?" Deadspin wanted to know.

"Well, I would definitely take issue with that premise," Favaloro responds, prompting a discussion about the purpose of the border wall.

Favaloro says, "No, I mean, the wall is only useful as a symbol anyway. It’s a symbol for something that I’m not in favor of, but it’s obviously just a pure symbol, right? When I claim that the wall is mostly as a symbol, the reason I’m saying that is because if you’re willing to walk all the way through a desert, this wall is probably not going to stop you. It was only ever a symbol anyway. So that just makes this whole [wall-climbing] exercise just a troll of a troll, really."

The idea of a wall is absurd, Nathan says.

Favaloro strongly agrees: "Yeah, it highlights the absurdity of it. It remains a very ugly symbol.

What's totally ignored in the interview is who would want to scale the border wall and why they would try to overcome the barrier. Human and drug smugglers and others aiming to enter the country illegally were totally disregarded by the two Trump and border wall opponents.