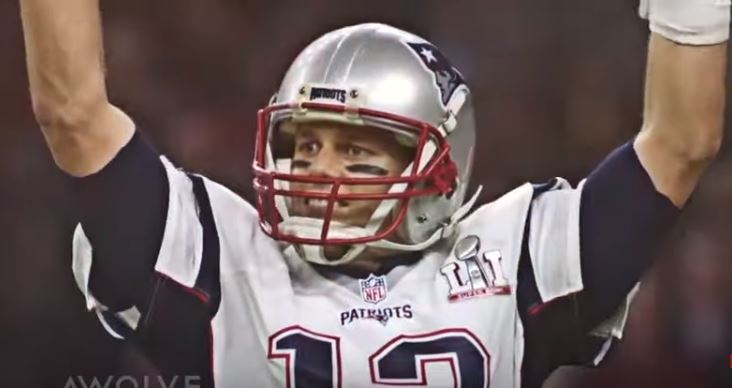 Tom Brady's six Super Bowl titles are not the reason for his popularity, says a University of Rhode Island associate professor. His popularity is really due to white rage and white supremacy, says English Professor Kyle Kusz in a badly over-reaching chapter in a new book published by Macmillan. Matthew Impelli reports the story in Newsweek.

In his abstract, Kusz writes that he critically examines cultural representations—advertisements, journalistic accounts, social media, documentaries, and even film and television cameos—of Brady "to show how they articulate with many similar racial, gender, and class ideas and affects that organize the Trump campaign and presidency. More specifically, I illuminate how Brady’s white masculinity is often coded as unapologetic about his socio-economic privileges, omnipotent in his manliness, and as a master of his body and athletic craft.":

"Brady embodies 'a living fantasy of white male omnipotence that serves symbolically as an imagined solution to white male anxiety for those who feel that the United States is in the midst of a culture war against white men and traditional American culture and values. In each of these ways, cultural (and self-) representations of Brady’s white masculinity showcase the new preferred representational logics used to render white masculinity visible within this latest wave of backlash politics that extends from the Trump White House through popular culture to the online spaces that brought the alt-right life. At stake in this politics is the renewal of white male prerogative as the taken-for-granted governing logic of American civic life.'"

Impelli, who mischaracterizes the chapter as Kusz's book, cites several points by the author to validate Brady's so-called "white supremacy," many of them very weak. One is that Brady's popularity began with the election of former President Barack Obama and its parallel to "a disturbing racial reaction among white conservatives in response to the idea that a black man would be [president]." Brady a conservative? Hardly. He isn't exactly doing Bring Your Bible to School PSA's for Focus on the Family, as New Orleans' Drew Brees recently did.

In a 2015 Under Armour commercial in which Brady appeared, the style of the ad "would not seem out of place in Leni Riefenstahl's infamous Nazi propaganda film, Triumph des Willens," Kusz wrote.

Also in 2015, Brady (seen in photo celebrating a Super Bowl victory) placed a red Make America Great Again hat in his locker, prompting then presidential candidate Donald Trump to later say: "I have so many great friends in New England including Tom Brady and Coach Belichick." "How good is Tom? Remember last year, he had the red hats?"

Following New England's 2017 Super Bowl victory, Richard Spencer, president of The National Policy Institute and co-editor of Altright.com, tweeted a photo of Brady kissing his wife and stating: "For the white race, it's never over". In another Spencer tweet, he called Brady an "Aryan Avatar."

Impelli says those Spencer tweets sparked many questions about Brady's support of Trump, especially from Professor Kusz. Since Brady hasn't supported any alt-right organizations, Kusz decided to mention that a man wearing a Brady shirt was once seen at a "far right free speech" rally in Boston.

Kusz describes Brady as "a wealthy, white man who unapologetically enjoys, and has even made a habit out of, spending time with other wealthy white men who treasure time 'with the boys' over all others."

There is also an entry in the chapter stating, “Even further, the ‘boys’ who feature in Brady’s photos of his trips to the Kentucky Derby are a group overwhelmingly made up of white men.”

Brady, we are told, invites himself "to be seen as a superior elite white man who has the world at his fingertips.” His family life is thoroughly organized by the “logic of white male prerogative.”

Mark Reynolds, of the Providence Journal writes that some are accusing Kusz of saying Brady is a white supremacist, but the professor denies that.