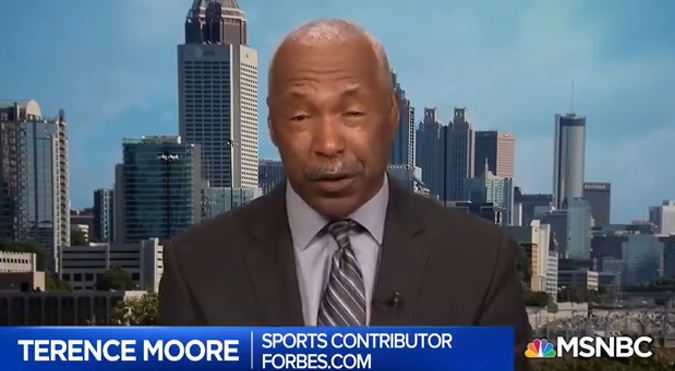 Just forget about all that bad blood between Colin Kaepernick and football fans. The former NFL quarterback is a moneymaker and the league that made a record $15 billion last season is embarrassing itself by blackballing Kaepernick, writes Terence Moore of Forbes magazine.

"(I)t’s also leaving the potential of even more billions on the NFL’s table with this craziness," Moore writes in support of Kaepernick-the-bundle-maker.

Moore (in file photo, right) is only looking at Kaepernick's fans — not his detractors — when he suggests the NFL ask Nike about the man's popularity:

"Nearly a year ago, Kaepernick signed a new contract with the Swoosh People to become their face with a flowing Afro.

"Since then, Kaepernick’s past of kneeling during the national anthem to protest social injustice hasn’t exactly stopped the public from hugging this former San Francisco 49ers quarterback and his giddy employers."

Moore writes that since the September 2018 start of Kaepernick’s Nike campaign, “Believe in something, even if it means sacrificing everything,” Nike sales soared 31 percent. The "Dream Crazy" commercial a just won a Creative Arts Emmy, too.

Also impressing Moore (and angering many Americans), Kaepernick told Nike to pull its new Betsy Ross sneakers, timed with July 4th, off the shelves because he said they referred to "a racially insensitive Colonial American flag." Nike's fully "woke" sheeple appeased him. The shoe hasn't completely gone away though; its value has since gone from $120 per pair online to an average of $2,500. The Denver Post reported the controversy was worth $3 billion for Nike.

With that kind of money at stake, apparently we who believe in America, the flag and apple pie should just forget Kaepernick's in-our-face defiance and join his fans in hugging this bundle-maker who can bring billions of dollars to the NFL.

Wisely, the NFL teams with quarterbacking needs haven't elected to bring in the man Moore calls "The Obvious Choice." He says it's absurd for these teams to ignore Kaepernick. Especially since no-names David Fales, Luke Falk and Trevor Siemian have gotten starting assignments in the wake of recent quarterback injuries.

"Who’s Falk? Don’t ask," the miffed Moore demands to know. He says, "NFL teams are continuing their battle cry in the shadows of 'Anybody but Kaepernick.'

Moore mentions that Kaepernick had a respectable passer rating ... three years ago, and has even completed passes to Cleveland Browns super receiver Odell Beckham Jr. (with no defenders present on their practice field.) But the money's the big thing here, after all.

"Kaepernick makes 'millions' from Nike," Moore says. "He also wasn’t destitute before that. During his last year with the 49ers in 2016, his net worth was $22 million, and he got more bucks earlier this year from the NFL after he joined former teammate Eric Reid in a huge settlement with the league over collusion."

Bottom line: this guy Kaepernick is so good at making money that the NFL should cash in with him, and the Americans he's offended should just let bygone$ be bygone$.