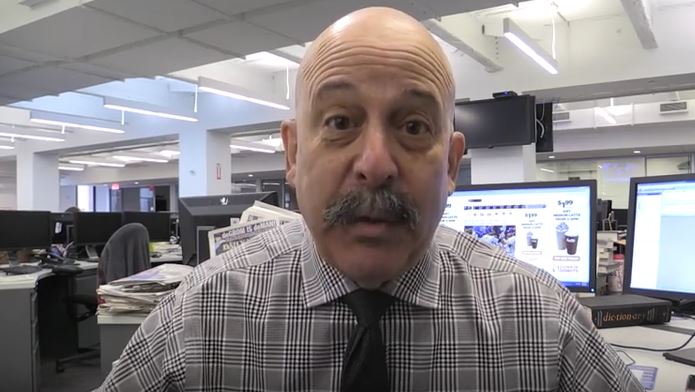 The good news is that some in the sports media may be giving up on the idea of Colin Kaepernick ever disgracing an NFL field again. The disgusting news is that one sports writer is suggesting an NFL pregame show hire him as an analyst.

It's Bob Raissman of The New York Daily News who says give Kaepernick a microphone and inject some life into pregame shows. First Raissman (appearing in the photo) complains about the current state of network NFL pregame shows, tagging Fox Sports' Terry Bradshaw and CBS's James Brown and Adam Schein for giving viewers the same old boring stuff.

"Yet there was, and still is, a way to inject some electricity, and unpredictability, into these mundane slogs. His name is Colin Kaepernick," writes Raissman. Along with, "If any of the network geniuses had the guts to defy the NFL, and actually think of providing viewers with something unique, they would have already hired Kaepernick."

Any of the networks, including NBC and ESPN, Raissman insists, could easily make room for the notorious one on their pregame sets. "Kaepernick would attract more eyeballs than the two of them combined. He would be great for their ratings business." He'd also anger and alienate a lot of viewers for his America-hating, cop-hating baggage.

Raissman knows this is a long shot with the network suits, who, like NFL owners, "don’t want to cross Sherriff (NFL Commissioner Roger) Goodell & Co." Nor do they want to deal with what is "perceived" as Kaepernick's considerable baggage. "Nor do they want to alienate and offend viewers who got bent out of shape over the whole kneeling thing, people who detest Kaepernick’s politics."

"Funny how politricks was not a problem for the NFL or ESPN in 2003, when the network was hiring super NFL fan and controversial, conservative commentator Rush Limbaugh to work on its 'Sunday NFL Countdown' show. With Limbaugh on board, the show’s ratings went up.

Limbaugh's comments about McNabb were totally focused on media coverage of McNabb, but turning it into a racial issue was a convenient way for his enemies to get rid of him.

Kaepernick would be like gold for a network that hired him, even if he sticks his foot in his mouth, Raissman says, and that's a risk worth taking because Kaepernick will surely increase ratings with the "kind of reality" he'll bring to viewers. Could Kaepernick's brand of reality bring weekly reporting on "police brutality" and clash with fans who want football, football and football?

"It would make a show totally different from its cookie-cutter competitors. Not only can Kaepernick talk X’s and O’s, but he would provide an educated perspective on the issues confronting players, which is more important now than ever," Raissman raves.

There's controversy surrounding the league every week, Raissman says, and that would be right up Kaepernick's alley. Networks are trying to limit controversy, which is the way the NFL likes it, Raissman complains.

"These networks, the NFL’s partners (to the tune of billions of dollars), will keep it that way. And, sadly, that means no microphone for Kaepernick," Raissman whines.