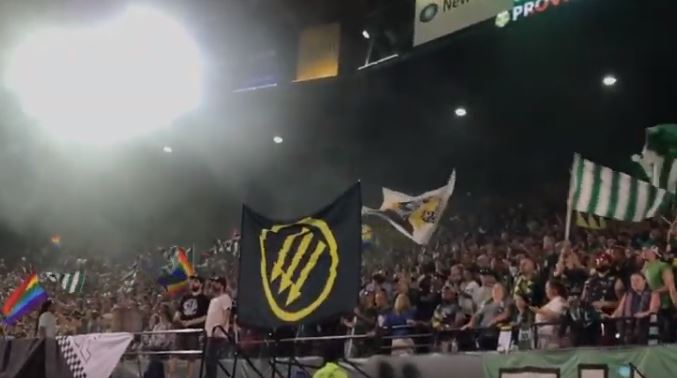 So we went to a political demonstration and a soccer game broke out. Or, as The Washington Post's Eli Rosenberg puts it, "There is an anti-fascist rebellion brewing in the Pacific Northwest. And soccer is at the center of it." Portland is the epicenter of the politicization of Major League Soccer (MLS), but it's spreading across the country, too. Anti-fascist groups are transforming American pro soccer into political events that are common in European and South American soccer ― with full U.S. media support.

The Washington Post, Deadspin and the Portland Mercury basically say the current soccer scene is contributing to the crumbling of the division between sports and politics, so deal with it. Also, anti-fascist groups are justified in their political protests at soccer games because of far-right fascists inspired by President Donald Trump. And because these radical socccer politics are really no different than the national anthem and military events at sports events.

Earlier this year, Major League Soccer banned political signs at its games, although rainbow flags are allowed to keep LGBT pressure at bay. This rule meant that fans could no longer display Iron Front imagery, which was first inspired by a group of anti-fascist and anti-communist activists in Nazi Germany that were banned in 1933. Iron Front banners have been cause for violence at MLS games in the past.

A Portland Timbers' team statement reflected the radical politics of a city that's gained notoriety for Antifa fascist violence in the streets:

“Despite its origins dating back to fascism opposition in World War II-era Germany and elsewhere, today most of the broader public are unaware of the Iron Front and its historic meaning. Instead it is widely associated with its frequent use by Antifa, often in the context of violence at protests or counter protests. The Iron Front symbol is clearly different than a national symbol like the American flag, that some have tried to argue has been misappropriated by certain groups.”

In a game at Portland Aug. 23, fans of the visiting Seattle Sounders and the Timbers remained silent for 33 minutes (denoting the year 1933) and then began madly waving banners for their pet political causes.

Rosenberg writes that U.S. soccer fans are becoming more political, like counterparts in Europe and South America, where fan clubs are "aligned with local political groups, unions and causes — socialist-aligned clubs and others that lean toward right-wing politics, or even overt fascism. All of which run against the deeply American notion that sports should be free from politics, despite the national anthem before the game, the military jets flying overheard, the overt displays of nationalism and patriotism.

"For Portland, a famously liberal enclave that has increasingly become a staging ground for clashes between the far-right and anti-fascist activists — the city’s political leanings have been reflected by the fans."

Rosenberg brings USC Professor Ben Carrington into his story to say, “The line that many try to draw between sports and politics has now been completely blurred. It was always an artificial line.” The author of multiple books about cultural, racial and political aspects of sports said the line between sports and politics in the United States has been crumbling for years. Leading Rosenberg to note, "NBA player protests about police shootings, protests during the playing of the national anthem before NFL games and the push for pay equality on the U.S. Women’s national soccer team."

Carrington adds: "You can understand why organizations want to take a stand and put the genie back in the bottle, but I think it’s too late. What’s a political symbol? Is the rainbow flag, for gay rights and LGBT a political symbol? For many people it is.”

Abe Asher, writing in the Portland Mercury, says if fans don't like politics with their sports, they should stay home:

“The truth is that there is never an absence of politics. You either allow anti-fascist imagery or you don’t, but either decision speaks volumes about the values and priorities of your organization. If certain other supporters are uncomfortable with anti-fascist displays in stadiums, they should take a hard look at where exactly their discomfort stems from or find somewhere else to spend their time.”

The MLS ban is "farcical," Asher writes. "The Iron Front logo is certainly no more political than MLS clubs wearing and selling stars-and-stripes or camouflage warmups, or, appropriately, allowing LGBTQ+ pride displays in stadiums. The truth is that there is never an absence of politics. You either allow antifascist imagery or you don't."

"It’s a depressing commentary on our current national moment that signs stating opposition to gun violence, fascism, and racism are deemed 'political'— scare quotes because whenever someone decries something for being 'political' they rarely mean it literally, since anything and everything can be political. ..."

Paez-Pumar also says it's good of the MLS to "court 'both sides; of these so-called political issues, both normal people and avowed white supremacists alike, and cram them all into one big stadium together hoping no one brings up the fact that one 'side' wishes members of the other never existed. The Portland Timbers seem to understand the ridiculousness of MLS’s 'we don’t want to scare off the neo-Nazis' position, at least on paper."