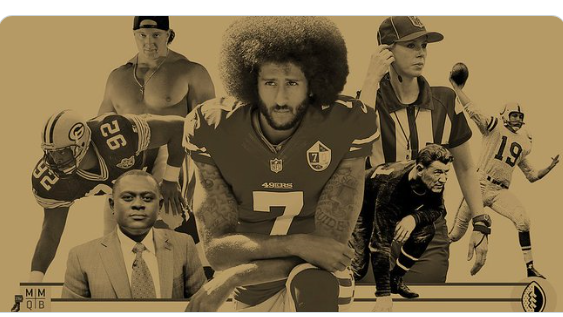 Ready for a really bad joke? Read Sports Illustrated's "100 Figures Who Shaped the NFL's First Century." It's an exercise in political correctness, if not downright zaniness. Malcontent Colin Kaepernick not only made the list, but is the cover photo as well. Several people on the list never set foot on an NFL playing field, and it's apparent the SI staff had ulterior motives behind their bizarre, PC selection process.

Wife-beater extraordinaire Ray Rice made the list, and so did ... Michael Jackson (see photo) ... but — you kiddin' me? — no one from the L.A. Rams' "fearsome foursome" made it!

No Bart Starr, no Deacon Jones, no Barry Sanders either. Not even the great Gale Sayers! What's his name again — oh, yeah, Wilfred Winkenbach — the guy who started fantasy football, is there, for Pete's sake. You're joking, right? I wish it could be so, but wait, there's more.

Ricky Williams is on it ― in part for his marijuana use. Colossal draft flops Jamarcus Russell and Tony Mandarin, a steroid abuser, are shockingly on this klunker of a list. Right there with Vegas bookie Jimmy "the Greek" Snyder, who brought gambling and a poor prediction record to the NFL.

SI tries to justify Kaepernick's inclusion because he "made his initial mark in the NFL by taking the 49ers to the Super Bowl in his second season, as a scrambling, unpredictable fill-in for Alex Smith. His biggest mark, of course, came from what he did on the sideline":

In the 2016 preseason, following a series of shooting deaths of unarmed black men by police, Kaepernick chose to sit on the bench during the playing of the national anthem, in protest of police brutality and systemic racism in the U.S. When media noticed and critics objected, Kaepernick instead knelt for the final preseason game, and continued to do so for each game over the next two years. The gesture, which spread around the league and to other sports, sparked an intense national debate over the role of athletes in politics, inspired Twitter insults from President Trump and arguably cost Kaepernick a job in the NFL. (He settled a collusion lawsuit against the league for an undisclosed sum in 2019.). Kaepernick’s community activism and his apparel partnership with Nike have kept him in the public eye, though he has not played a down since 2016. “I don’t want to be someone who can be put into a category,” Kaepernick told The MMQB in 2013. “I want to be my own person. … And I want to have a positive influence as much as I can.”

Melissa Olson is recognized as a "Pioneering journalist whose mistreatment in the Patriots locker room changed how the game is covered." She was a Boston Herald writer who was sexually harassed by Patriots' players. Sad for her, but this is merely a PC nod by SI.

Rice is on the list because his video-taped "first-round knockout" of his wife raised awareness of the league's failures on social issues.

Williams did the same for dope smokers and bringing mental health into focus for the NFL. SI gave a nod to Lyle Alzado, too, for warning about steroid use, though he would never be top-of-mind for serious NFL historians.

Of course, no NFL influencers' list would be complete without the great Lee Clow. Lee who? Well SI will have you know he was the "Creative mind behind Apple’s revolutionary '1984' Super Bowl commercial, which transformed advertising and the NFL championship broadcast." Impressive! It was the start of the "Super Bowl ad phenomenon."

The late Michael Jackson had an amazing influence on the NFL, too, we read. The “King of Pop turned the (1993) Super Bowl halftime show into a major standalone event." And his successors have turned it into an unwatchable event.

Give SI credit for one generous mention, though: Tony Dungy. "Few men have brought as much dignity and grace to their profession as Tony Dungy has to coaching," they write. On that, we can agree.