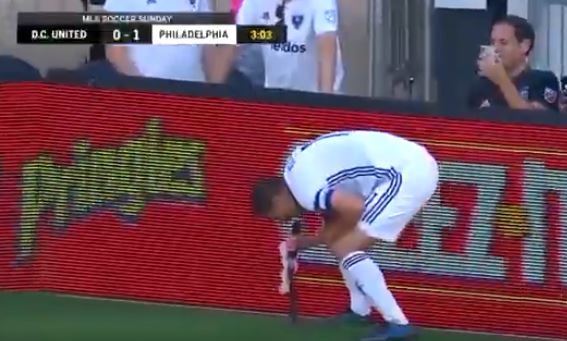 Scoring five goals in one game can give a pro soccer player an inflated sense of self importance on matters of public policy. Philadelphia Union winger Alejandro Bedoya got so full of himself on his huge day Sunday in D.C., that he dictated a gun control demand to Congress. USA Today's For The Win sports blog denied it was a call for gun control and labeled it "patriotism at its best."

For The Win writer Nate Scott was enthralled with Bedoya for jabbing social justice activism down the throats of viewrs:

"What was noteworthy was after Bedoya scored the goal he ran over to one of the on-field microphones, picked it up, and demanded that Congress do something about gun violence (see photo of Bedoya yelling into microphone above).

"After a weekend that saw multiple mass shootings across the United States, it was a desperate plea from someone who cares deeply about the topic: Please, do something," Scott wrote. "It was also one of the most patriotic things I've seen on a sports field in some time."

Scott said it was fitting that Bedoya grew up near Marjory Stoneman Douglas High School in Parkland, Fla., the site of another horrific shooting, and made his demand in a game at Washington, D.C., the home of Congress.

In the nation's capital, Bedoya used his platform to speak out and demand our elected officials do something, "anything, to stem the tide of gun violence in our country," Scott wrote, adding:

"This is where the stick-to-sports crowd will crawl in and say that Bedoya shouldn't use a game to talk about sports. That he shouldn't let his personal politics enter the field where he is employed to play soccer."

Bedoya was not calling for a repeal of the Second Amendment, Scott argued. He didn't call for a gun grab either. However, neither Bedoya or Scott mentioned better scrutiny of mental cases, and the go-to argument for post-shooting media and social justice screamers is ... gun control ... and total disregard for the Second Amendment:

''He called on Congress to stop its inactivity and do something to end gun violence. If that will be viewed as controversial, you have to ask: Who is for a Congress that doesn't do what it's elected to do? And: Who is for gun violence?"

This is a view that Congressmen were elected to legislature gun control and an assumption that Congress can assign a few words to a piece of paper and angry people will no longer erupt in violence.

When the Twittersphere erupted with demands that Bedoya stick to sports or offer real solutions to the violence, Scott flipped his narrative and wrote it's not the job of "high-work-rate attacking midfielders to write our gun policy." Gun policy? Isn't that covered by the Second Amendment, which Bedoya was not attacking, we're told?

Scott concluded: "Bedoya came into our nation's capital, and using his platform, demanded that our elected officials wake up and do what they were elected to do. He didn't hurt anyone. He didn't even suggest one policy over another. He spoke out and asked our elected leaders to lead. I can think of no things more patriotic than that."