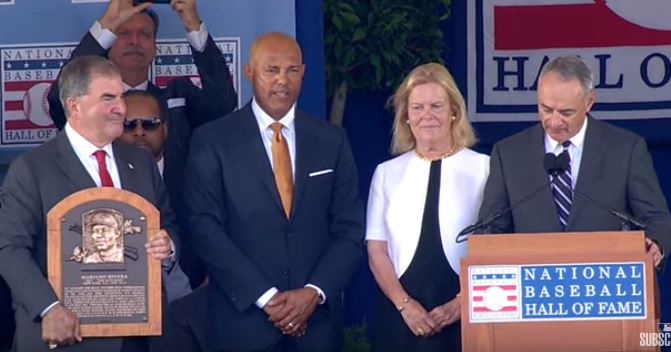 Yankees' legend Mariano Rivera (appearing second from left in photo) was inducted into the Major League Baseball Hall of Fame today amid much fanfare — and sharp criticism from Daily Beast writer Robert Silverman. The sleazy hit piece focused on Rivera's Christian faith, his [gasp!] right-wing politics and his associations with so-called bigots, racists and loons.

Silverman ripped the greatest relief pitcher of all time, a man who has "served at the pleasure of a racist president, taken part in thinly veiled propaganda on behalf of a far-right government in Israel, and gotten chummy with outright bigots and apocalyptic loons. None of this will be inscribed on his Hall of Fame plaque. It should, even if much of the sports world would very much like to pretend none of it exists." Silverman recited a list of activities incriminating Rivera —from the position of a leftist writer.

For example, Rivera has made numerous trips to Israel and his support for the Israel Defense Forces is "a matter of public record," Silverman writes. He's also "guilty" of being named "Man of the Year" in 2013 by the New York Board of Rabbis.

Rivera visited religious landmarks and "chatted up government officials," the pro-Palestinian Silverman complains. During a visit to the Golan Heights, Rivera is reported to have said of Lebanon and Syria, “There’s an ideology that infects their thinking, and they just don’t want to live in peace.”

Also While at the Golan Heights, Rivera said the IDF trains soldiers to be “a better person, a better citizen, and a better human being,” but a couple months earlier, Israeli soldiers killed at least 60 Palestinian protesters in Gaza and injured thousands more.

Lots of Palestinians get hurt all the time. It keeps Hamas and the West Bank government in power.

Silverman also incriminates Rivera for returning to Israel in 2018 with the Friends of the Israel Defense Forces (FIDF), and Trump-supporting Yankees' President Randy Levine was also associated with that group. Another strike against Mariano.

Rivera also gets chastised for having attended a recent conference in Washington organized by Christians United For Israel. Other attendees included Vice President Mike Pence, Secretary of State Mike Pompeo and National Security Adviser John Bolton. There's some serious guilt by association. Rivera's "actions make it clear his sympathies lie with the Trump administration, which has backed all manner of far-right policies when it comes to Israel," Silverman says.

It just gets worse for the Rivera-hating Silverman. Unlike all those far-Left athlete/politicos who refuse to visit the Trump White House, Rivera appeared there as a member of the President’s Council on Sports, Fitness, and Nutrition. (If only he'd have participated in Michelle Obama's "Let's Move" dog and pony shows, he'd be hailed as a fantastic Hall of Famer.)

Howard Bryant, the author of a book attacking military promotions at professional sports events, tells Silverman that while Rivera was open about his faith, "he was very cagey, and very, very savvy about what connections those religious beliefs linked to. Now we’re seeing who Mariano Rivera really is, or who he’s currently influenced by.”

He's what he always was -- an individual with his own opinions (and the greatest cut fastball ever known). And, it seems, a pretty cool guy.

It's pathetic that a man of faith, universally admired by those who've followed his amazing career, is targeted in this hit piece over his Christian faith, biblical beliefs and his support for Israel. This was a shameful, craven attack by Silverman, one designed to besmirch Rivera on the very day of his enshrinement at Cooperstown. But it's not surprising in a time when sports media glorify radical leftists like Colin Kaepernick and Megan Rapinoe.