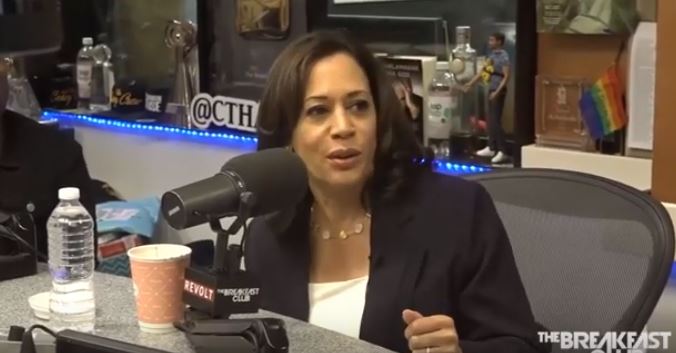 The Russian bots are coming! The Russian bots are coming! And they used outrage over Colin Kaepernick's 2016 national anthem protests to mettle in the election, says U.S. Senator and presidential candidate Kamala Harris. In a Friday interview on "The Breakfast Club" radio show, Harris said the easiest way for Russian online trolls to sow discord in American politics in 2016 was to stoke racial animosity.

Over the weekend, SF Gate and the Huffington Post gave credence to Sen. Harris's theory.

SF Gate's Eric Ting writes, "Sen. Kamala Harris (D-Calif.) said the controversy surrounding the national anthem protests of former San Francisco 49ers quarterback Colin Kaepernick was 'not a thing' until Russian trolls started fanning the flames on social media. The bizarre claim suggests patriotic Americans, and the veterans among them, would actually have to be prodded to erupt over Kaepernick's highly offensive take-a-knee protest.

Specifically citing the national outrage following news of Kaepernick's protests, Sen. Harris (appearing in photo from Friday's radio broadcast) said of the Russian bots, "They test out a couple of things to see what can get the American public going at each other, pointing fingers at each other. Guess what gains the most heat? Race."

Ting acknowledged that Kaepernick's protests made national news when media circulated a photo of him sitting on the bench during the playing of Star Spangled Banner during an NFL preseason exhibition game nearly three years ago.

The Huffington Post's Mary Papenfus reports, "Sen. Kamala Harris (D-Calif.) said she blames Russian bots for helping stir up the frenzy that Donald Trump, then a candidate for president, helped set off over Colin Kaepernick taking a knee during the national anthem at National Football League games." Papenfus, who predicts Russian interference with the 2020 U.S. election could be even worse than in 2016, added:

"Trump repeatedly blasted Kaepernick for taking a knee as the 2016 NFL season was gearing up to protest racial injustice and police brutality. Trump claimed the then-San Francisco 49ers quarterback, who is black, was disrespecting the flag and the military. But the flames over the issue were fanned by Russian bots, Harris said."

Sen. Harris also said she "already knows" her presidential campaign is presently the target of Russian bots now, and, during The Breakfast Club broadcast, she discussed ways for Americans to counter Russian bots on social media.

"The Russian bots started taking that on. We also have to know when we're being played, and we also have to respond immediately when we know something is inaccurate," the senator said, in addition to this:

"In 2016 it's fair to say a lot of folks thought, 'No one is going to take that seriously, that won't gain any heat.' ... We have to pay attention to that stuff and know that it's not going to necessarily be real people doing it, it'll be others and those bots that stir it up to the point where it generates heat and people get swept into it."

Sen. Harris has been among Democrats leading the charge against alleged foreign government interference in American elections. She and Senators Dianne Feinstein and Richard Blumenthal are co-sponsoring a bill "intended to help combat foreign election interference," Ting reports.

Neither SF Gate or The Huffington Post offered any pushback to Sen. Harris's claims.