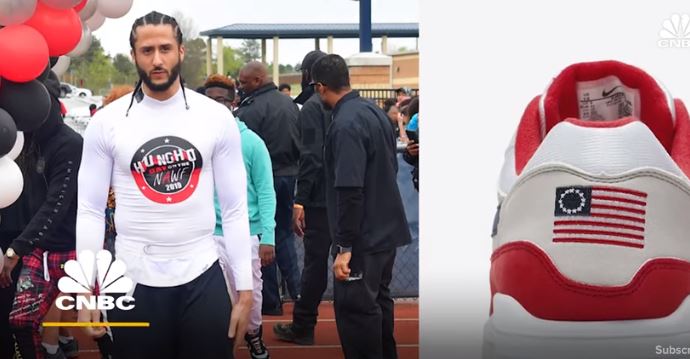 Suddenly labeled by media as "Captain America," Colin Kaepernick has saved Nike from making a huge mistake and commanded an apology from a minor league baseball team in Tennessee that realizes you don't tug on Superman's cape. Numerous sports media reported on these two developments this week, driving home the point that a man of Kaepernick's immense social justice stature is not to be disregarded or toyed with.

Carron J. Phillips, writer for The Shadow League blog, came up with the "Captain America" bile and says Kaepernick is one of the people we should celebrate on Independence Day. He wrote, "Days before this country celebrates its birthday, Colin Kaepernick is once again doing everything he can to save America from itself. Kaepernick stepped in to shut down Nike’s idea of releasing the Air Max 1 USA this week to commemorate the Fourth of July, as the heel of the shoe featured the Betsy Ross flag. ... At this point, Kaep is Captain America."

The Kaepernick-Betsy Ross shoes story captured the attention of countless news and sports media across the nation this week. On Wednesday, numerous sports media reported that the Class AA Tennessee Smokies baseball team had deleted a tweet and apologized to Kaepernick for making light of the Ross shoes controversy.

The colonial era Betsy Ross flag, Phillips asserts, "symbolizes an era in our history, the 1770s, when American was being 'made great' by the work of slaves, this idea was a bad one from its inception." Bad for any organization indebted to the America-hating Kaepernick to the tune of mega millions of dollars, that is.

There's another reason the Betsy Ross flag was a real bad idea, according to Phillips. In 2016, the superintendent of the Grand Rapids, Mich., school district had to apologize for students who displayed the Betsy Ross and “Make American Great Again” flags at a high school football game. Some snowflake parents thought the flags were symbols of white supremacy and nationalism, and the NAACP had to condemn the students' actions.

With this sorry and presumed history of so-called racist kids conveying evil messages by displaying the Ross and Trump flags, and, as Phillips alleges, given that Kaepernick is the face of Nike's 30th anniversary “Just Do It” campaign, "he has attained the power to tell a company on the level of Nike’s to 'chill.'”

Nike isn't paying "Captain America" Kaepernick to be a flag cop, but his heroiic assertiveness came just in the nick of time, says Phillips:

"But once again, Colin Kaepernick has done something he didn’t have to for the sake of others. Proving once again, that he’s one of the reasons, and people, we should be celebrating during this week of independence."

In the related story about Kaepernick and the Tennessee Smokies, MSN writer Jason Owens praised the team's management for making things right with "Captain America" after trolling him and Nike with a stunt.

"Bravo, Tennessee Smokies," Owens writes. The Smokies apologized to Kaepernick and said they didn't mean to offend him when the Chicago The Cubs' minor league affiliate tweeted four photos Wednesday of the Ross flag etched into the dirt of their field with the caption: "Hey @Kaepernick7 after a lot of thought, we have decided it's best to just do it. #America." They also deleted the tweet that Owens called mocking.

"Just in time for July 4, the double-A affiliate of the Chicago Cubs has chosen to stoke the flames of America’s culture wars with a publicity stunt involving Colin Kaepernick, Nike and the American flag," wrote Owens, who found a political tie-in to the story as well.

Owens drilled down into the ownership of the Cubs and Smokies to further politicize the "stunt."

The Chicago Cubs are co-owned by Republican National Committee finance chairman Todd Ricketts, and the Cubs informed the media they had nothing to do with the Smokies' tweet, Owens added. Furthermore, the Smokies are owned by Republican Randy Boyd, who ran unsuccessfully for governor in Tennessee last year.