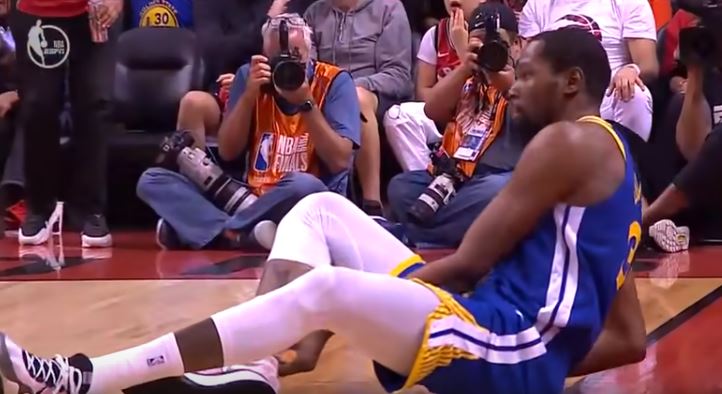 According to The Undefeated senior researcher Martenzie Johnson, bad behavior by fans during this year's NBA Finals is symptomatic of whites' dehumanization of African-American athletes. The fans' boorish treatment of injured Golden State star Kevin Durant prompted Johnson to invoke a centuries-old history of African Americans being characterized as selfish, savage, monkey-like and brainless. His story, "Kevin Durant and the dehumanization of black athletes", appears on an ESPN blog with its own history of race baiting.

In Game 5 of the NBA Finals last week, Durant (see photo of him after the injury) played only a few minutes before rupturing his Achilles tendon, prompting cheers from classless Toronto fans. Earlier in the series, one of the Warriors' owners had shoved the Raptors' guard Kyle Lowry in a sideline confrontation, leading to the owner's ejection from the arena and prompting Johnson to characterize that singular incident as part of a white "owner mentality." Johnson assumes these actions were "just the end result of an overall culture of dehumanization as it pertains to black athletes." And he projected the actions of a few onto the entire league.

Johnson said the league's perceived humanity of its 75-percent majority black players "goes beyond what team owners think of their employees. The dehumanization of black athletes begins with only seeing players as jerseys and numbers with no physical blood and flesh beneath them." Johnson was only warping up his outlandish arguments:

"For centuries, African Americans have been characterized as selfish, savage and animal-like (hence constant monkey analogies), and in sports, blacks are seen as brainless natural athletes, supposedly born more equipped to succeed at sports than the more intellectually-inclined white athletes. To audiences, black players are nothing more than the real-life versions of the characters on video games such as NBA2K and Madden NFL, incapable of actual feelings or pain (there’s a long-held belief that blacks have less-sensitive nerve endings than other races)."

Additionally, Johnson cited research alleging an association between African-Americans and apes that leads to increased support of violence against blacks. Black athletes were also seen as selfish, lazy and too consumed with themselves and their money. So-called "coded language" implies that professional black athletes don't have as much heart or desire as college athletes.

"Jeff Bezos, Mark Zuckerberg and Warren Buffett are some of the richest American men in the world, yet you would be hard-pressed to find a criticism that their wealth has affected their desire to do their jobs," Johnson contends.

Golden State center DeMarcus Cousins adds to Johnson's theories of racism by charging that athletes are viewed as second-class citizens.

As Durant went to the floor after his injury, the Toronto fans only saw a mindless video game avatar simply malfunctioning, Johnson writes. The writer also theorizes that hard-hearted fans overlooked Durant's calf injury, which sidelined him for several previous games, because he was saving himself for a $200 million contract when he becomes a free agent after the season.

The same could be said of NBA players Kawhi Leonard and Derrick Rose, who were on the disabled list for huge chunks of time in past seasons. They were either frail cupcakes or more interested in signing huge contracts upon their return to action.