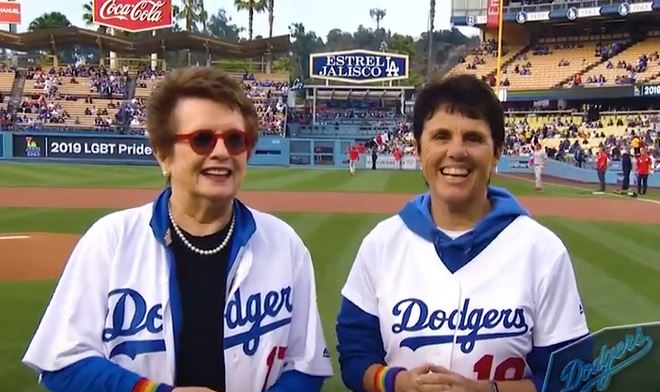 On Friday night, for the first time ever, a rainbow flag flew alongside the American flag on LGBT Pride Night at Dodger Stadium. Across the country in Wisconsin, another baseball team called strike 3 on Chick-fil-A and banished the Christian-owned business from its premises. The LGBT blog Outsports is celebrating both events, here and here.

"The Los Angeles Dodgers did up LGBT Pride Night to the nines Friday, with a rainbow-colored 'LA' on the mound and Pride flags flying at Dodger Stadium. 'For the first time ever at Dodger Stadium, the LGBT flag flies alongside the American flags,' the Dodgers tweeted prior to the game with the Philadelphia Phillies."

Buzinski also reported that Dodgers' part owner and retired "tennis legend and LGBT icon Billie Jean King said she 'couldn’t be more proud of the welcoming, inclusive space the Dodgers are creating for all their fans.'” 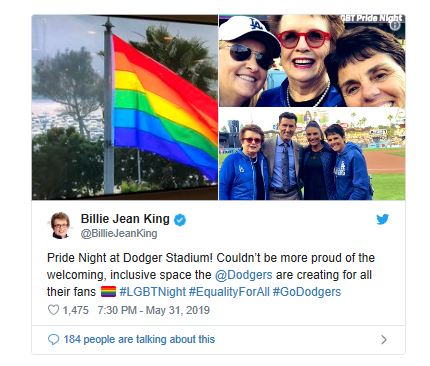 Billy Bean, appointed in 2014 as MLB's first "Ambassador for Inclusion" — to stamp out homophobia in the game — was also there to spread the tolerance. So was lesbian rocker Melissa Etheridge and the cast of "Queer Eye." The Dodgers' game against the Philliies was preceded by the Varsity Gay League's kickball match. And we wonder why baseball attendance is steadily dropping. Can't we just stick to baseball instead of taking sides in the culture war?

Outsports boasted that, of the 28 MLB teams hosting Pride Nights this season, the Dodgers' event is one of the "most comprehensive." Thanks to Erik Braverman, the team's gay senior vice president of Marketing, Communications and Broadcasting.

That LGBT tolerance was nowhere to be seen in Madison, Wisconsin, home of the Mallards, a team of collegians playing summer league baseball. In the Outsports report by Bryan "Wonderboy" Bell, the team announced last week on Facebook that it had ended its business relationship with Chick-fil-A. "The Mallards cited the fast food chain’s reputation for supporting anti-LGBTQ organizations, such as the Fellowship of Christian Athletes, as the reason for their business relationship dissolving," Bell wrote. Here's how the team announced its "beaning" of CFA:

“For nineteen years, the Mallards have prided ourselves on building an experience focused on fun and inclusion while working hard to stay away from the sometimes negative energy that can surround day-to-day life around us. In that spirit, today we are announcing that we are ending our relationship with Chick-fil-A. What was intended as a simple promotion has evolved to associate us with something that we don’t stand for: the support of anti-LGBTQ organizations. Simply put, our corporate values do not align... We intend for the Duck Pond to be a place where everyone feels welcome. We are proud supporters of LGBTQ equality and human rights.”

The Mallards apologized for “not realizing the negative impact of our decision and the people this would offend.” Nevertheless, team president Vern Stenman said the ducks want "to create this environment that’s comfortable for everyone." The LGBT pressure groups and their media pals, that is. Everyone except Christians who live out their faith in the work place.

Chick-Fil-A's commitment to a "higher calling," through a $1.6 million donation to another so-called "bigoted" Christian organization, the Fellowship of Christian Athletes, had drawn the wrath of the tolerant-lite LGBT folks. Including Outsports.

Bell wrote, "The move might hurt the Mallards’ bottom line, but the team showed that it prioritizes maintaining a hate-free Duck Pond. The team looks poised to have a good season, but they’ve already become a champion for LGBTQ support."