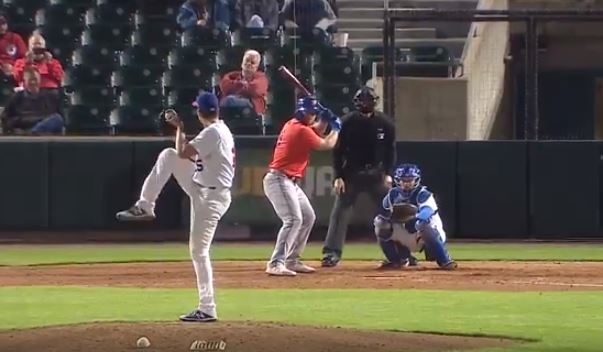 Tim Tebow's haters are out with the long knives again. Their attacks are personal, petty and pathetic, and it's not just because he can't hit AAA pitching. Deadspin blogger Tom Ley ridiculed Tebow's abstinence until marriage beliefs and called him a coward. Ted Berg, of For The Win, laughingly reveled over Tebow's poor batting statistics. In addition, Barstool Sports's "Clem" mocked Tebow and the Bible.

Ley's headline went: "Tim Tebow Chooses to Watch, Stand Fast in the Faith, and Strike Out Looking Against a Position Player." His story began: "When we last checked in with Tim Tebow, he was preparing for professional life full of Triple-A baseball and a personal life full of matrimonial sex. Tebow and his fiancée still haven’t officially tied the knot, so the sex is still on hold, as is the progress of his baseball career."

With a less-than-ideal .161 batting average, Tebow (batting in photo) has been "extremely bad" in his season with the New York Mets' Triple-A Syracuse team, Ley wrote. Both writers made fun of Tebow for striking out against a position player Tuesday night.

"What kinda no-good coward goes up to the plate and tries to grind out a walk when a position player is on the mound and your team is winning 15-2 in the ninth inning?" Ley said in mocking Tebow. "Swing the damn bat, man! Tim Tebow is huge and strong and not a very skilled baseball player, and when presented with the opportunity to unleash those big muscles on a meatball from a non-pitcher, he just stood there like a lump. Pathetic!"

"The 31-year-old New York Mets hopeful struck out looking against a minor-league position player on Tuesday night. LOL! He only has one home run this year. LOL! He’s been batting below the Mendoza Line all season. LOL! He accidentally kicked his first-base coach in the groin. LOL!

After belittling Tebow, Berg admitted very few people on the planet, after 12 years away from baseball, "could perform as well as Tebow in the minors. Like .0001%." No one would blame Tebow if he quit baseball, and just two months into the season, the major leagues are still not out of the question for the former college football star and Heisman Trophy winner.

They weren't the only sports media making hay on Tebow striking out against John Patterson, a first baseman and outfielder for the Buffalo Bisons. Patterson is a former college pitcher who threw in relief so his team wouldn't have to use up anymore pitchers in a blow-out loss to Syracuse.

The ever-disrespectable gutter dwellers at Barstool Sports tweeted: "Tim Tebow just got gassed up by a position player pitching."

A Barstool story bylined "Clem" went after Tebow more aggressively. He wrote the "hyenas and jackals taking pot shots" didn't realize Tebow understood the unwritten rules of baseball about not trying to embarrass teams when you're already winning big. "Tim also has read a little book called The Bible a few times and knows the passage that says 'Blessed are the merciful, for they shall obtain mercy.' That’s in The Gospel of Matthew, which sources tell me is God’s favorite book."

Jesus Christ also would have kept the bat on his shoulder, the sanctimonious Clem wrote: "If you have a problem with Timothy Richard Tebow, The Bible, and/or baseball, you(r) soul is already trash. Don’t worry though, I’m sure Tim will pray for your soul because that’s the kind of guy he is. Athlete, hero, and inspirational leader."

Tebow Derangement Syndrome is in full season again at the old ball game.