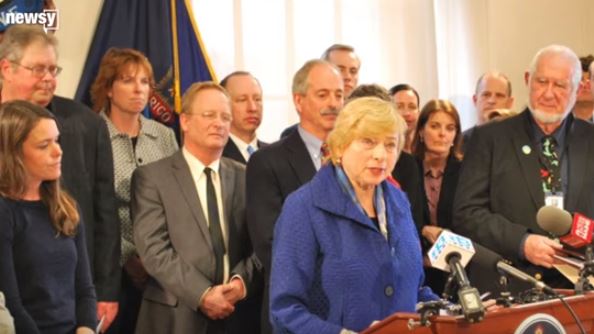 By the time a new law banning Indian nicknames at public schools in Maine takes effect later this year, it will affect absolutely no one. The only remaining public school with an Indian mascot voted it out prior to this law taking effect. The hollow law will merely stand as a hallmark to political correctness, celebrated by CNN.com and the Democrat governor and lawmakers promoting their feel-good folly.

Move over, last of the Mohicans. Skowhegan High School has seen the last of the "Indians." Though the vast majority of Native Americans (nine in 10) see no problem with Indian nicknames, the snowflake progressives in Maine find imaginary mascots too painful to tolerate.

Democrat Gov. Janet Mills (center, in photo) signed bill LD 944 into law on Thursday. CNN.com carried statements applauding the law, starting with the governor: "While Indian mascots were often originally chosen to recognize and honor a school's unique connection to Native American communities in Maine, we have heard clearly and unequivocally from Maine tribes that they are a source of pain and anguish."

State Rep. Benjamin Collings, also a Democrat, sponsored the solution in search of a problem to honor the state's Native American tribes by ditching Indian nicknames that do not exist:

"Our tribal communities laid the foundation of our state. They are people, not mascots."

CNN also gave Penobscot Nation Ambassador Maulian Dana a platform for her long fight to change Native American mascots. She said it was very meaningful to have her daughter present for the governor's signing of the bill outlawing the phantom mascots.

The Hill's Owen Daugherty plugged Maine for becoming the first state to ban Native mascots, though we're still watching for a state to ban Indian mascots that actually exist. It's much ado about nothing in Maine.

The Hill also noted that Maine's law goes hand in hand with the state having previously replaced Columbus Day with Indigenous People’s Day "as a way to honor Native American Communities in the state."

Hayley Miller, in her Huffington Post story on the outlawing of fake mascots, cited a 2005 study by the American Psychological Association calling for the immediate retirement of all Native American symbols by schools and organizations, finding their use “harmful” and “inaccurate.”:

Someone forgot to tell this to 90 percent of the Native Americans (according to the 2016 poll) who aren't melting down over Indian mascots.

Central Maine offered some rare comments in opposition to the law. Republican Rep. Joel Stetkis said it did not specify what's offensive about Indian nicknames. School board member Jennifer Poirier, a leader of the Skowhegan Indian Pride Facebook group, asked about compliance and what punishment would result from disobeying the law.

However Central Maine also quoted Sherri Mitchell, a member of the Penobscot Nation and indigenous rights attorney, who called the school's Indian nickname a "legacy of racist entitlement and distorted imagery related to our people.”