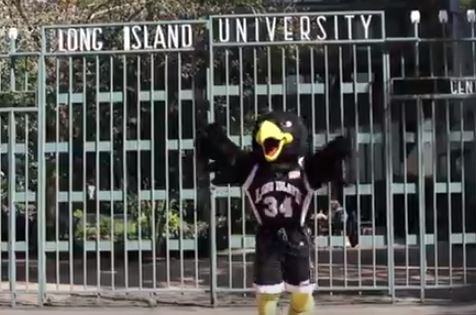 The racially insensitive Redmen, Chippewas and Fighting Sioux have been erased by the PC powers that govern college sports, and now college PC birdbrains are fabricating charges of racism against innocuous mascots. Cal State-Long Beach doomed Prospector Pete to a death sentence earlier this spring, and not to be done, Long Island University Brooklyn, is pecking its "Blackbirds" mascot to death.

Believe it or not, LIU Brooklyn President Kimberly Cline told a group of alumni, many of whom were former athletes, the university has heard that the Blackbird is an offensive racist mascot. And when snowflakes "hear things," they can melt down pretty darn fast. This vague, anonymous charge of racism was reported by the New York Post.

Alumni are not happy about the demise of the Blackbirds, a nickname they say is unique in college sports. In a biting commentary titled, "Another college mascot falls prey to PC birdbrains", New York Post columnist Phil Mushnick is riled up about it, too, writing:

"This week, for real, LIU Brooklyn eliminated 'Blackbirds' as its 80-year mascot and nickname because the school determined it’s racist. Its magnificent, dignified logo — a blackbird clutching a dangling, interlocking 'LIU' — eradicated for a logo and mascot to be named later.

"Left for consideration, if not action, is the removal from radio stations of Paul McCartney’s gentle ode to a broken-winged creature, 'Blackbird.”

Mushnick also writes about the hypocritical acceptance of vulgar rappers spewing real racism, but anyone else invoking the word "Blackbird" is crossing the line of acceptability:

"At LIU, unless it’s incorporated and sung by a vulgar, N-wording, Glock-worshipping, women-degrading rapper, 'Blackbird' is a racist song that should be 'disappeared.'"

Furthermore, there’s not enough real racism to eliminate, so more of it must be concocted. The demand for such is high and the supply must be met, Mushnick writes.

Another thing Mushnick finds ironic is the popularity of pro sports teams shamelessly wearing “menacing” black uniforms, but “Blackbirds” is now unacceptable as LIU’s mascot and nickname. That hypocrisy is present right there in the Big Apple where the Arena Football League's New York Streets will wear black uniforms, he points out.

In the New York Post news story about the Blackbirds, former LIU-Brooklyn athletic director Jerry Donner said the nickname is iconic and most of the alumni he's been in contact with "are very passionate about the Blackbird. It’s special. We don’t want that history to be rewritten. We want it to be part of the university’s legacy for the future. I think the most important part of this is the university re-evaluate its decision regarding the iconic Blackbird. It would be to their advantage.”

President Cline won't be swayed. The blackbird is racist and must go, plain and simple. Bird-brained political correctness has won out, and alumni and students will now share a task that will be incredibly difficult in this age of hyper-sensitivity: selecting a new nickname that does not offend someone.

For an institution of higher learning and a progressive center of intellectualism, Long Island Brooklyn sure took its sweet time in recognizing the so-called "racist" overtones of its mascot. It's been 84 years in fact! The school's teams have gone by the Blackbirds nickname since 1935.