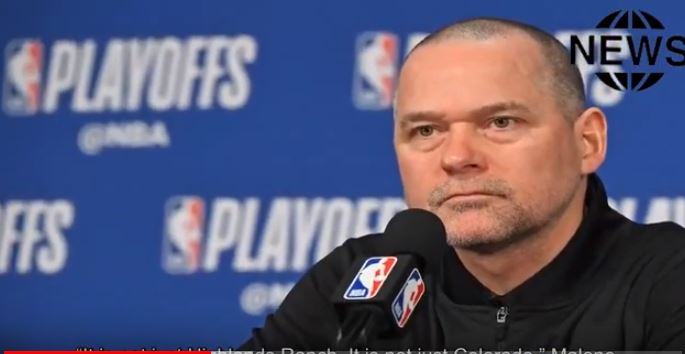 Just hours after the deadly school shooting in Colorado Tuesday, the coach of the NBA's Denver Nuggets called for gun control. Then Denver Post sports columnist Mark Kiszla joined in the call, declaring, "We love our guns more than we love our children" and demanding "the change" that translates to gun control.

Prior to the Nuggets' home playoff game against Portland Tuesday night, Coach Michael Malone (see photo of Malone's pre-game press conference) veered from basketball to the shooting. He lives in the Highland Ranch community and his daughters attend a school two miles away from the scene of the crime:

“It’s not just Highlands Ranch. It’s not just Colorado. This is an epidemic, and it continues to happen. That’s the frustrating thing. How do you stop it? Gun control, laws, whatever it might be. I’m not a politician. I don’t want to sit up here on a soapbox. I just want everyone back in Highlands Ranch to know we’re with you. Thoughts and prayers are never enough.”

Gun control is popular with politically obsessed NBA coaches, including San Antonio's Greg Popovich and Golden State's Steve Kerr. Kiszla, a two-time winner of the best sports columnist in USA award given by the Society of Professional Journalists, made a ludicrous leap from Malone's remarks:

"We were reminded Tuesday of the real No. 1 cause of terrorism in the United States: We love our guns more than we love our children."

Kiszla was only getting warmed up. "Sandy Hook and Parkland have become entrenched in the American lexicon," he wrote. "After every shooting, we’re outraged, we weep, we pray. But the bloodshed doesn’t stop.

"There have been more than 200 shootings on school grounds throughout the United States since April 20, 1999, when unthinkable violence at Columbine High School forever changed the way kids look at our halls of education. More than 50 percent of U.S. teenagers worry about gun violence on campus, according to a Pew Research Center survey conducted last year."

Last month marked the 20th anniversary since students Eric Harris and Dylan Klebold killed 13 people and wounded 24 more at Columbine High School in the Denver suburb of Littleton. Kiszla infers that we haven't learned much about gun control since then:

"We vowed never to forget the 13 people who died at Columbine. But how much have we really learned, and how much has really changed? In Colorado alone, gunfire has shattered the illusion of safety at schools in Bailey and Littleton and Centennial before the violence came to a campus down the street from Malone’s home in Highlands Ranch.

"On tragic days like these, when gunfire stains a school with blood, we are all heartsick and pray for peace, while avoiding the hard truth about the root cause of a chronic, pernicious illness in this country.

"We love our guns more than we love our children.

Hard truth? Change? Kiszla's "truth" is not about ignoring people who are downright evil or mentally ill. His idea of change is about removing the constitutional right to bear arms in the interests of life-saving self defense.