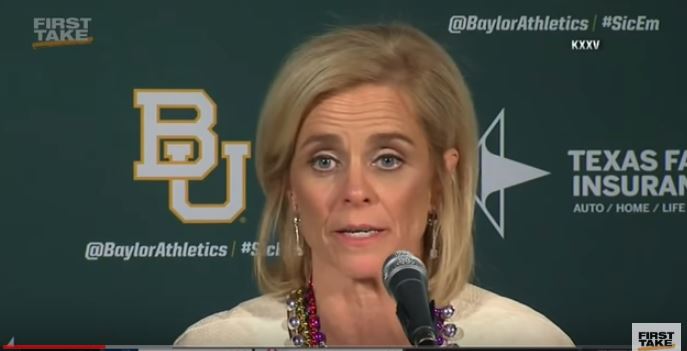 A week ago, Notre Dame women's basketball coach Muffet McGraw was the toast of the woke world for her "impassioned speech on women's equality." She ranted that men are running the world, the Equal Rights Amendment hasn't been passed in the U.S. and she vowed to never hire a male assistant coach. This week the Baylor coach, Kim Mulkey, whose team beat Notre Dame for the national championship, is getting denounced by the New York Daily News for straying from that "femi-nazi mold."

"Kim Mulkey is entitled to her own opinion," Phillips writes. "The problem is, she has a history of opinions that are damaging to women and the sport she coaches. The Baylor women's head basketball coach's name is in the news because of her recent comments about how she would welcome a White House invitation from President Trump since her Lady Bears defeated Notre Dame, 82-81, in the national championship last Sunday."

Phillips, who writes about the intersection of sports and progressive politics, indicts Mulkey for guilt by association. He says those White House visits were in the past, and, "The problem is, this is the present. Trump hasn't invited a single women's championship team, college or pro, to the White House. Why would you ever want to visit someone who's made it clear they don't want you to?" Phillips complains before launching into a litany of Mulkey and Baylor putdowns.

The winner of three national championships, Mulkey is one of the best women's basketball coaches in history, Phillips concedes. But ... "You would think that a woman with that kind of resume would be more into empowering women. But instead of me saying it, I'll let Mulkey prove it to you in her own words."

Unlike the sexist McGraw, Mulkey said she would have no problem hiring a male assistant coach, mentioning the possibility of hiring her own son.

Referencing corruption in the men's basketball program at Baylor 16 years ago, Mulkey said, "I'm happy for Baylor University. Plaster that on the front page of every national newspaper. It doesn't get any more positive than this." Mulkey says the scandal is in the past and it's time to move on; Phillips adds it to his gunnysack of grievances against Baylor's women's coach and refuses to move on.

In 2017, Mulkey defended her program during a time when a sexual assault scandal led to the implosion of the Baylor football program. She said the football scandal did not justify women's basketball prospects rejecting her program.:

"This is a great institution, and I would send my daughter here, and I would pay for anyone else's daughter to come here. I work here every day. I'm in the know. And I'm tired of hearing it. This is a great institution. The problems that we have at Baylor are no different than the problems at any other school in America. Period. Move on. Find another story to write."

Phillips doesn't find other stories to write. His mission is to advance the progressive social justice agenda and to tear down its opponents. He says Mulkey is entitled to her own opinion; his written words say otherwise.

Finally, Phillips also took Mulkey to task for reportedly telling her players not to discuss their sexuality in public. That was after the lesbian Britney Griner had played for Mulkey and went on to become the first player taken in the WNBA draft. Another strike against Mulkey, this time for not endorsing the LGBT movement.