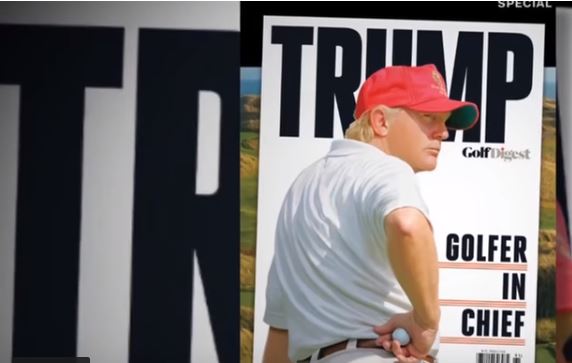 Well the Left couldn't nail President Donald Trump on Russia, but Rick Reilly, a former Sports Illustrated writer who now writes books and movies, got him on golf. Reilly's book, "Commander In Cheat: How Golf Explains Trump" is an exposé on the president's golf exploits. Reilly has also challenged President Trump to a golf match without the help of his "cheating caddies."

USA Today re-printed a story on this by Golfweek's Roxanna Scott. The sports pages are indeed very useful to "the resistance." Scott writes:

"In a tweet, Reilly says he'll take on Trump for 18 holes with $100,000 on the line. 'As long as we both had rules officials with us and you don't get to use one of your cheating caddies… You game?'" 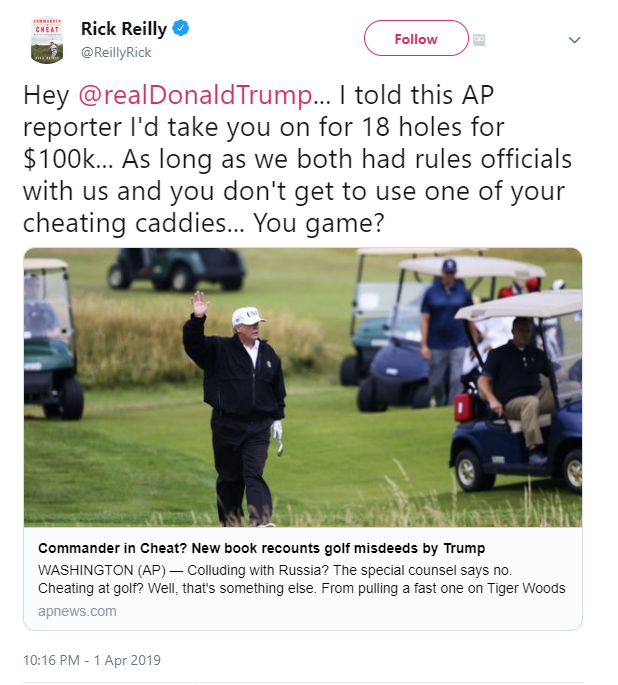 Reilly told the Associated Press that if the president agrees to a challenge match and he wins, he will donate the money to a charity of Trump's choice. But he's got to get the president's attention first. Trump has yet to respond to the challenge.

Scott relates how, in "Commander in Cheat: How Golf Explains Trump", Reilly alleges that Trump, his caddie and Secret Service agents routinely move Trump's ball out of difficult lies. He also cheats by turning in scorecards that do not count his mis-hits, Scott notes.

Reilly says he got his information by interviewing many people who have played with Trump.

If true, this is hardly the "Fast and Furious" type of scandal that marred Barack Obama's presidency. No matter, anything sports media can do to help the progressive cause is "newsworthy." If they couldn't get him on Russia, they'll nail him on golf.

Reilly admits as much, saying, "I don't know much about politics, but I know golf and it really offended me, not as a voter or as a citizen — just as a golfer," Reilly told the Associated Press. "In golf, he's definitely not exonerated. There's been dozens and dozens of people that can declare him guilty of cheating."

By comparison, sports media practically made Obama out to be an amazing talent even though he collected splinters on the bench throughout high school basketball. For The Win's Charles Curtis wrote the "Big O" was a poor shooter, but still contends he could have started for a low-level college team. Did not know college basketball teams are recruiting high school bench-warmers!

Chapter 1 of Reilly's book is titled, "The Big Lie," and starts with a quote by P.G. Wodehouse: "To find a man's true character, play golf with him." Reilly begins the first chapter with this:

"In the 30 years I've known Donald Trump, I never believed anything he said, but the wink-wink of it was that I never thought he believed any of it either. He was like your crazy uncle at Thanksgiving who sits in the living room telling the kids whoppers about punching Sinatra while the parents all roll their eyes in the kitchen. He was a fun, full-of-it fabulist."

AP requested a response to the book from the White House, but did not receive one.