Special Olympics  not only does a great job of providing programs for the mentally and physically impaired, but also excels at fundraising from non-government sources. The organization raises 90 percent of its funding, but when U.S. Secretary of Education Betsy DeVos proposed ending federal funding, ESPN and Sports Illustrated pushed back hard against the Trump Administration.

The Special Olympics funding topic is No. 1 on today's Sports Illustrated "Extra Mustard" column list. Author Jimmy Traina gave DeVos a thorough bashing for her proposal to cut 18 million federal dollars given annually to the Special Olympics. He also focused heavily on a campaign by ESPN's SportsCenter to keep the organization federally funded:

"SportsCenter anchor Kevin Negandhi, who has worked with Special Olympics (see photo of 2017 Florida power lifting competition above) for the past five years, covered DeVos's inhumane proposal in a powerful and heartfelt way by sharing the stories of some of the people who have participated in the event.

"This was a perfect way for Negandhi to address the situation. He kept his bosses happy by never mentioning that DeVos and Trump are awful and he let the message of each story speak for itself. That's how you do it."

A cut in federal funding is only at the proposal stage and has not been finalized, but Traina dismisses anyone who would write him and say he's reporting "fake news." Well guess what, he asks:

"Just proposing cuts to the Special Olympics, not to mention a 26% reduction to state grants for special education and millions of dollars in cuts to programs for students who are blind, makes you a horrible, cold, callous person."

Negandhi posted several of his own tweets, all following the playbook of Democrats' past efforts to save Big Bird from Republicans' proposed de-funding of PBS (remember the Million Puppet March?). One tweet stated, "I’ve been a part of @SpecialOlympics w @espn for the last 5 years.. watching the growth, confidence and true happiness from the athletes and their families has changed my life.. The Movement touches everyone involved.. there are so many stories to share from @worldgamesAD (1)" 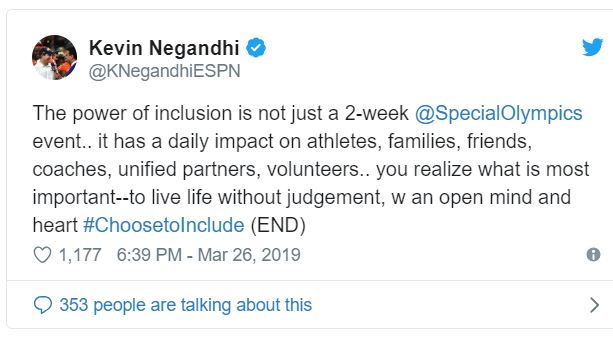 The way these Special Olympics athletes overcame adversity is indeed heart warming, and we will continue to hear more of them for years to come. But the future existence of Special Olympics is not at risk, and the media's use of their stories misses the point about where to draw the line between public taxpayer-supported funding and funding for private organizations.

For as the Washington Examiner's Tom Joyce writes, "despite the outrage, the Trump administration is right: the federal government should cut its funding for the Special Olympics." If it's merely a nice program, "then it's hard to justify it forcing people to spend their money on something they could voluntarily donate to. The Special Olympics does not need federal funding."

In the 2016 fiscal year, Special Olympics, a tax-exempt 501(c)3 organization, raised $111.7 million in revenue, with 10 percent coming from the federal government. SO had $1.8 million in surplus and $61.3 million in net assets. More than 80 percent of its funding came from corporate sponsorships and direct mail campaigns. Joyce concluded: "Rather than treating it like a government agency, the Special Olympics should be treated like any other private charity."

Oh, and one more little note about media bias. Sec. DeVos previously donated a sizeable chunk of her salary to Special Olympics, but somehow this evaded Traina's rant. Even The New York Times was fair enough to include that in its story about the scathing attacks on the secretary of education.