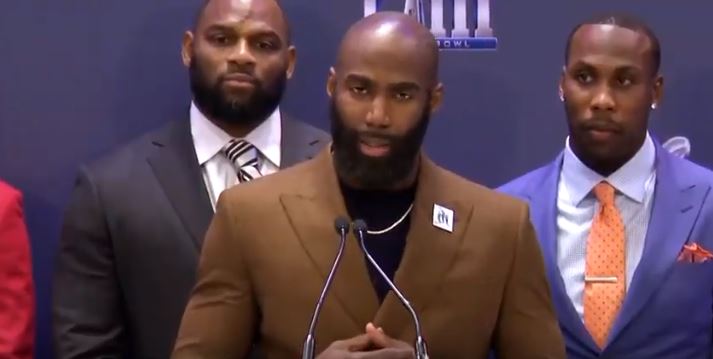 From panels and press conferences to exhibits, social justice efforts were everywhere at Super Bowl 53 (see Eagles' Malcolm Jenkins, center in photo, at social justice press conference.) The most controversial football player in the world hasn’t played in the NFL in two years, but Colin Kaepernick was figuratively "at" the Super Bowl. This sums up Natalie Weiner's take on the culture surrounding Sunday's Super Bowl game in Atlanta. The SB Nation writer had a bad case of social justice mania.

Weiner wrote of Kaepernick, "It’s extremely unlikely that he agreed to be part of the events leading up to the big game. But if you walk into the NFL’s annual fan festival inside the Georgia World Congress Center, just past the Bud Light-sponsored bar and the maze-like NFL Shop and a virtual reality football video game station sponsored by the U.S. Air Force, his presence is there, tucked inside an educational 'activation' called Champions of Change."

Social justice warriors won't admit it, but pro football has moved beyond Kaepernick, the social media-sniping hater of cops, former National Anthem kneeler, lover of communist Cuba and American freedom-denier. Weiner crowed about Kaepernick's place in the centerpiece of an interactive timeline called Road to Progress on display in Atlanta:

"The third to last mark on the timeline shows a now-iconic picture of Colin Kaepernick on one knee in protest. 'Colin Kaepernick first took a knee during the national anthem before a 2016 preseason game against the San Diego Chargers,' reads the accompanying blurb. 'His act of protest to bring attention to violence against and oppression of people of color continued throughout the 2016 season.' The last entry on the timeline is the formation of the Players Coalition."

Enthralled by the player not one NFL team will touch, Weiner writes, "Even if Kaepernick is only visible at the Super Bowl as a footnote, his message and, specifically, his continued unemployment casts a shadow over much of America’s biggest annual sports event — one that has grown as the justifications for his joblessness become increasingly difficult to believe." Shadow? For many football fans, Kaepernick's absence has been a brilliant ray of light!

Weiner proclaimed there have never been more officially-sanctioned social justice events surrounding a Super Bowl than this year. Commitments to equality seemed extremely strong—"except for the fact that man who inspired all of it had nothing to do with any of it."

The NFL has previously donated $89 million to the Players Coalition, led by a group of current and former NFL players advocating for social justice wish lists. They had a press conference in Atlanta, where Carolina Panthers receiver Torrey Smith acknowledged Kaepernick’s influence, “There have been literally thousands of men over the years who have said these things, have been vocal about them, but nothing moved the needle until Kaep took a knee.” But it was Kaepernick's absence in 2018 that moved the needle, with better TV ratings for the NFL.

At a social justice panel discussion, former NFL player Brian Banks kept the drum beating for Kaepernick. "Show us that you believe in equality. Show us that you want to end social injustice. And how do you do that? Give that man his job back. If you don’t, then you’re just blowing smoke,” he said.

As for the actual NFL championship game that towered over the former San Francisco malcontent who insulted America's veterans, Weiner unfurled a list of negatives.

First, Commissioner Roger Goodell gave a "non-answer" to Kaepernick's absence on an NFL roster. “If a team decides that Colin Kaepernick or any other player can help their team win, that’s what they’ll do,” he said.

Second, Weiner writes, "Kaepernick’s absence from the league hasn’t made the symbolism of his protest any less potent; it’s just been transformed into a symbol of martyrdom, one in which the NFL remains a steadfast persecutor, and not an ally."

And finally, the SB Nation social justice water carrier did not spare the Super Bowl halftime show of criticism, either. Halftime entertainment boycotts made it "a PR nightmare for the league, as artists who agreed to participate face criticism that they’ve betrayed Kaepernick’s cause," Weiner writes. She related how Cardi B refused to perform at halftime out of respect for Kaepernick, the man "who sacrificed his job for us ... ." Weiner claims "everyone" is publicly supporting him—from LeBron James to Angela Davis, a radical communist dismissed decades ago by mainstream Americans.

There's nothing like a little football to go with social justice mania, especially at the Super Bowl.