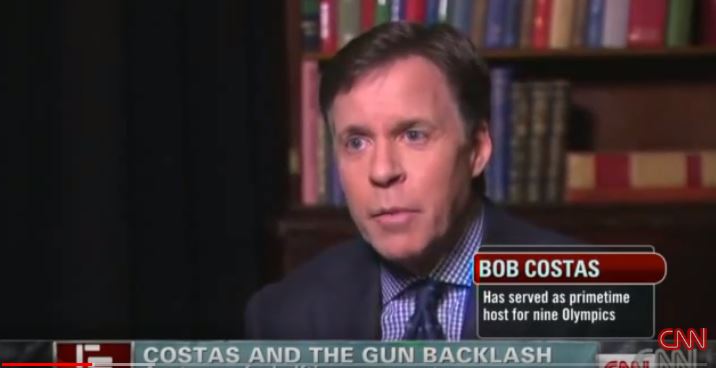 The nauseatingly controversial Bob Costas, an eight-time National Sportscaster of the Year award winner, is leaving NBC. The New York Post's Andrew Marchand reports it is difficult for Costas and the network to find projects he feels passionate about and which fit into NBC's current properties. No wonder. Costas has, over his four decades with the network, demonstrated his passion is political lecture. He's worn out his welcome among sport fans who tune into sports broadcasts for sports and prefer that politics be left to the newscasters.

We may not have seen the last of Costas yet, but here's a review of his most disgusting political lectures and controversies.

During NBC's Sunday Night Football halftime show December 2, 2012, Costas advocated for gun control. He raised the topic because Jovan Belcher, a linebacker for Kansas City, had shot and killed his girlfriend, Kasandra Perkins, then drove to the Chiefs' practice facility and fatally shot himself. Costas said it was likely that neither would have died if he didn't have a gun.

Among the critics were Lou Dobbs, then Republican presidential candidates Herman Cain and Mike Huckabee and others. Washington Post reporter Erik Wemple defended Costas for taking advantage of the opportunity to speak on the issue. In the following week, Costas went on MSNBC's The Last Word with Lawrence Donnell (see photo of Costas above) and denied he was advocating for repeal of the Second Amendment or gun control. But his denial of the obvious was befitting of former President Bill Clinton's famous word parsing:

"What I was talking about here, and I'm sorry if that wasn't clear to everyone, was a gun culture. I never mentioned the second amendment, I never used the words 'gun control'. People inferred that.

"Now, do I believe that we need more comprehensive and more sensible gun control legislation? Yes I do. That doesn't mean repeal the second amendment. That doesn't mean a prohibition on someone having a gun to protect their home and their family. It means sensible and more comprehensive gun control legislation. But even if you had that, you would still have the problem of what Jason Whitlock wrote about, and what I agree with. And that is a gun culture in this country."

On his May 26, 2007 radio program, Costas said the course of the Iraq War and President George W. Bush's other mis-steps led him to conclude Bush's presidency had "tragically failed." Even if you're a conservative Republican and you're honest about it, you have to conclude this is a failed administration, he said.

The 2014 Winter Olympics took place in Sochi, Russia, which Costas and Vladimir Pozner deemed the homophobic games because of the host nation's "anti-LGBT" stance. Their commentary earned them the Gold Medal awarded by GLAAD, the Gay & Lesbian Alliance Against Defamation.

Ross Murray, senior director of the GLAAD Media Institute, wrote that "Costas didn't waste any time, opening NBC's Olympic coverage of the games by mentioning Russia's anti-LGBT and human rights violations. Hopefully other sports commentators will follow his lead." Here's a transcript of their discussion:

Costas: "What is the likely practical effect, if any, on athletes and visitors, of the anti-gay propaganda law?

Pozner: I think zero. No effect at all. I don’t see anything happening. In fact, I think that they, the powers that be, are going to be super careful to see that nothing happens to any gay athletes or guests during the Olympics.

Costas: What about gay Russians and their supporters after the Olympics pack up and leave?

Pozner: Gay Russians have a very tough time. I've known some who have been on the brink of suicide. Others who want to leave the country. This is a homophobic country. I would guess that 85% of the population is really, really anti-gay. I mean, it can be physical. They are in a very difficult situation. And the law that was passed, although it is a law to protect minors from gay propaganda, in fact, plays into the whole homophobic mentality.

By expressing skepticism about the future of football, Costas did nothing to endear himself to the NFL and pro football fans. He also turned off fans by opposing the Redskins' nickname and by supporting the NFL players who kneeled during the national anthem. Newsbusters' Curtis Houck posted this highly objectionable Costas quote in 2017:

It was all in 40 years' work on NBC since Costas started there in 1979. As Newsbusters' Matt Philbin wrote last August, with Costas gone NBC is about to become "a lot more watchable" because the network "seems to have caught on: people don’t tune in to a football game to receive political lectures."