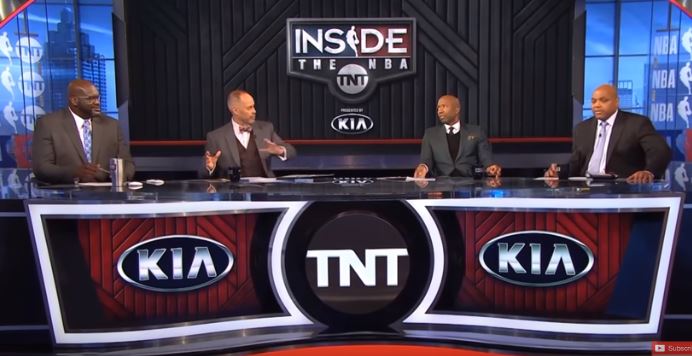 Big brash Charles Barkley went "snowflake" on Thursday evening's TNT Inside The NBA program. A discussion of next month's NBA all-star game in Charlotte and whom the fans will vote for starting positions sparked painful memories for Barkley of the 2016 presidential election. He likened his opposition to NBA fan votes to the voter mistake of electing Donald Trump's as president.

"I don't like the fans voting," Barkley (far right in the photo) said. " ... Look what happened last time we let them make a big decision ...Get a clue: White House."

American citizens have been selecting presidents since 1789, but when Barkley and other progressives don't like the results of elections, they want to change the rules. Trump won the electoral vote in 2016, and last week Rep. Steve Cohen (Tenn.-Dem) proposed an amendment to the Constitution that would abolish the Electoral College.

Barkley: “I don’t like the fans voting”
Kenny Smith: “You’re a fan”
Ernie Johnson: “Get used to it, it’s only been happening your entire life”
Barkley: “That don’t make it right. Look what happened last time we let them make a big decision”
Smith: “What happened?”
Barkley: “Get a clue: White House”
Johnson: “So you should take that vote away from the fans too?”

Andrew Bucholtz, reporting on this controversy for the Awful Announcing blog, likes Barkley's politics. He defended Barkley for frequently straying from the topic of basketball and assumes most people are fine with him saying whatever pops into his mind. He recalled Barkley criticizing President Donald Trump’s immigration policies on CBS’s The Late Show in May 2017, hosting an American Race show on TNT in the summer of 2017 and appearing with Alabama Democratic senator-elect Doug Jones in a pre-election rally.

The Awful Announcing writer is oblivious to fan opposition to Barkley. He thinks the Barkley comment was just a "one-off line" and doesn't believe Barkley actually opposes the system of citizens choosing our leaders. He's merely pointing out that "democracy has some results he doesn’t like," Bucholtz explains.

Barkley's comments have not provoked massive outrage, Bucholtz says, but if the same statement was uttered on ESPN, it "probably would have fired up a whole round of 'ESPN is too liberal!!!' takes."

While Barkley's latest controversy didn't happen on an ESPN program, it does prove once again that Awful Announcing "is too liberal!!!" In addition to taking sides with the progressive Barkley, Bucholtz just a few days ago blasted NFL Hall of Famer Ray Lewis for speaking about his faith in an interview with Fox Sports 1's Colin Cowherd. In September, the same left-leaning blog encouraged ESPN's Stephen A. Smith to deviate from sports and go on the attack against Supreme Court Justice Brett Kavanaugh during his confirmation process. It's getting harder to discern the difference between news rooms and sports desks.