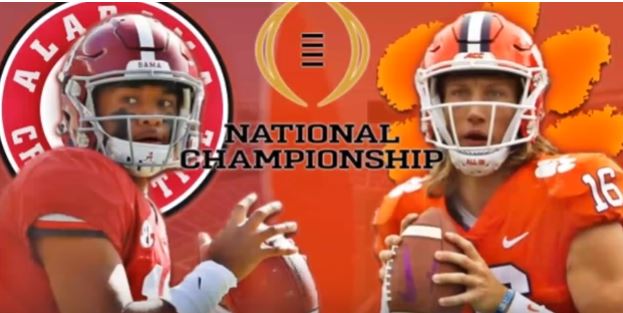 Monday night's national championship college football matchup between Clemson and Alabama goes far beyond football. To the USA Today sports staff progressives, it's a matter of red state teams from Alabama and South Carolina invading Hillary Clinton country when they square off at Levi Stadium in California's Santa Clara County.

Writer Brent Schrotenboer calls it an invasion of football fans from two of the reddest states in the nation:

"Monday's game will be played deep in the heart of the Pac-12, where 73% of voters in Santa Clara County chose Clinton in her unsuccessful bid for president in 2016, making it an unlikely party scene for the red-state visitors.

Schrotenboer says it might seem like a foreign country to visiting fans from the Southeastern part of America. He mined an anonymous internet quote from a Clemson fan who remarked:

“I don’t care if we play in North Korea. I’m going to the game and I’m thrilled. Yes I may see homeless and Nancy Pelosi. I don’t care.”

Additionally, Schrotenboer comments: "The college football cultural gap seems to have gotten more pronounced as the nation's political divide has deepened, and Monday's game provides an especially stark example of the distance in between, literally and otherwise."

Furthermore, USA Today goes on to relate how viewership, attendance and football success demonstrate that college football is dominated by politically red states. The top 29 most intense markets for watching college football on ABC and ESPN come from "two fanatic regions" -- the South, including Texas, Florida and Oklahoma, and the Midwest, Ohio in particular.

"The fervor for football and how it sorts out is part of a larger cultural set of beliefs that are reflected in political attitudes, in religious viewpoints and just the way in which people grow up and view their particular part of the world,” says Ellen Staurowksy, professor of sport management at Drexel University. “It’s a 21st century form of entertainment but something that has deep roots in rural America.”

This may seem like the literary version of punting on first down, but Schrotenboer goes further off the rails when he brings up the difference in parenting by adults in blue and red states and some other issues that are clearly over the heads of those hayseed hicks from the South. He quotes Murray Sperber, formerly a professor at Indiana University and Cal-Berkeley and the author of multiple sports books, on topics that have nothing to do with what happens on the field Monday night:

"One element that gets overlooked in the red-states-vs.-blue-states football question is attitudes on parenting. There have been some good studies on this, and some show that (President) Trump voters value obedience very highly – often highest – in their children. Whereas (Democrat) Hillary (Clinton) voters often wanted their children to become independent, creative, etc. Apply this to football parents and fans, throw in the military tradition in football, and the controversy over concussions, and you get some explanation why football thrives in red states and declines in blue ones."

Schrotenboer undermines some of these claims by stating that the enlightened, true blue Left Coast's Pac-12 Conference is lagging well behind the curve on marketing and revenue generating compared to the more conservative regions of the Southeastern Conference and the Big Ten Conference. In fact, some red state teams draw 50,000 fans for their spring intra-squad football games, but eight Pac-12 teams averaged fewer fans than that for their regular season games.