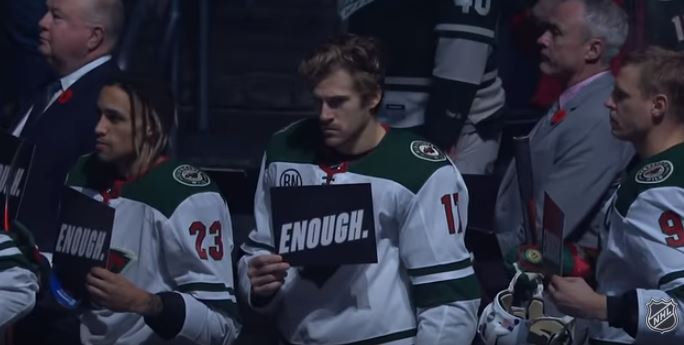 In the aftermath of recent mass shootings, professional teams and athletes are pondering how they can mobilize for gun control. Sports Illustrated writer Alex Prewitt is cheering them on from the press box and offering advice on how they can take the guns out of Americans' hands.

After Ian Long shot 12 people and killed himself at a bar in Thousand Oaks, Calif., Nov. 8, professional sports figures whirled into gun control mode. Prewitt writes about how players for the NBA's Los Angeles Lakers and Clippers, Milwaukee Bucks and Atlanta Hawks all wore "ENOUGH" t-shirts during pre-game warm-ups, and the NHL's Los Angeles Kings wore helmet decals and everyone on the L.A. and visiting Minnesota Wild teams held up "ENOUGH" signs.

Prewitt added: "To the north, the most vocal gun control advocate in pro sports would issue another public plea for legislative action. 'Our government has to address it,' said Warriors' coach Steve Kerr, whose father was assassinated at the American University of Beirut in 1984, via the San Francisco Chronicle.

“We can’t just keep spewing out the same garbage about, ‘Well, it’s the second amendment. This is the price of freedom.’ Give me a break.”

Kings COO Kelly Cheesman said he's not yet sure what message his organization can craft, "but for now we’re going to focus on pushing this message out there. More than anything, this can’t be accepted as our new norm.”

Prewitt joins in the call for gun control, too, stating:

"The truth, of course, is that ENOUGH is nowhere near enough. Not when 96 people die of gun violence every day, according to five-year averages compiled by the CDC. Not where 307 mass shootings had occurred this year, at least through Thousand Oaks. Even so, it can serve as a sliver of encouragement that the Kings desire to nudge the needle in this regard: initiatives, campaigns, funds ... something instead of nothing."

Roberto Luongo, a Canadian goalie for the NHL's Florida Panthers, is on board with gun control, too. He was hopeful for change after the killing spree at Stoneman Douglas High School, and on Feb. 22, he delivered "an emotional, three-minute pregame speech" about the shooting in Parkland, Fla., where his family has lived for more than 12 years. Prewitt writes that Luongo "was especially inspired by survivors like Emma Gonzalez and David Hogg and Cameron Kasky, teenagers who couldn’t yet vote but nonetheless found their voices as activist leaders."

“I think that was a huge thing that happened with the kids fighting,” Luongo said. “I thought we were really close to some real progress. I mean, they’re [still] working their butts off to make a difference, but I feel like not a lot of people are listening.”

Of course, that "progress" means grabbing the guns of honest citizens who just want to protect themselves.

Prior to the recent U.S. elections, Luongo made a video imploring viewers to “vote for common-sense gun laws for our children.” After he retires from hockey, he plans to become a U.S. citizen and continue fighting for gun control. “Then hopefully I can start voting and make a difference." Prewitt adds, "Until then, he and wife Gina, who hails from Parkland, do what they can. Donations, drives, hammering the message home."

"Even the worst cynic must see some value in these gestures," Prewitt writes. Later in the story he includes a link for voter registration, stating: "That is the greater war, right there, waged in voting booths and congressional chambers. It’s near-impossible to imagine sports teams outright endorsing candidates—or even wading into mildly political waters with their messaging. But new battles are being staged each day; five more mass shootings have already occurred since Thousand Oaks, according to the Gun Violence Archive database."  [NB Editor's note: The pro-gun control website Gun Violence Archive's definition of a mass shooting is overly broad, and includes shootings where no one was killed as well as gang-related or domestic violence.]

Luc Robitaille, a Hall of Fame hockey player and now president of the L.A. Kings, is fully on board with pro teams and athletes pulling power plays for gun control. He says that if sports organizations "get together, there are things we can do to help society.”

A committee of Kings front office executives has held several meetings to figure out what the organization can do. Prewitt advises, "Maybe their next call should go to Kyleanne Hunter, vice president of programs at the Brady Campaign, one of the country’s oldest gun control nonprofits." Hockey teams could partner with the Brady Campaign. And every athlete could speak out like Kerr and Luongo, Prewitt writes.