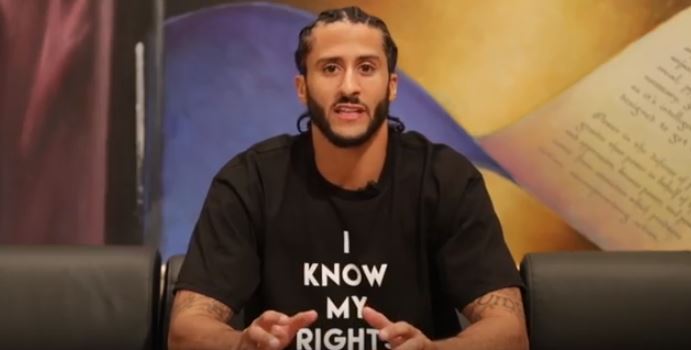 At last a crack in what has been the media's almost universal support for Colin Kaepernick has surfaced. A new Medium blog contributor named Kitanya Harrison has until now been unwavering in her support of the social justice warrior, but she takes a sharp deviation from her past literary praise for Kaepernick to relay troubling information from a reader about the America-hating ex-quarterback. It's that he allegedly mistreated women in the past, he is propping up an abuser of women and that Kaepernick and his girlfriend, Nessa Diab, are guilty of ethical improprieties.

Harrison says she recently received communication from a woman she calls “Salome” "claiming to have known Kaepernick during his time at the University of Nevada-Reno (UNR). She said she remembered Kaepernick in college 'disrespecting women, my friends and people I grew up with.'” Salome said: “It’s hard for me to reconcile the person he is in the media with the person I saw.” Kaepernick “wasn’t a great guy.” Salome believes people can change, but said, “I’m so tired of putting aside the dishonorable side of men as leaders for the cause.”

Harrison can’t confirm these claims, but says the messages she received from Salome "got me to acknowledge the dissonance in Kaepernick’s public image I’d been unwilling to let myself see. Her messages prodded me to re-examine a few moments in Kaepernick’s more recent public life that disturbed me but that I’d brushed aside. ..."

As one who believes the NFL's exiling of Kaepernick is "a labor rights violation," Harrison discovered a troubling alliance between the former pro quarterback and singer Chris Brown. She saw a photo on Twitter with Brown holding an “#IMWITHKAP” t-shirt and a note that 20 percent of Kaepernick merchandise proceeds goes to his Know Your Rights Camp (KYRC). Harrison says: "The camp is the crown jewel in Kaepernick’s philanthropic endeavors. Brown has a well-documented history of violence towards women, and I remember staring at the picture in confusion when I realized the KYRC account had tweeted it. The image was also shared on the camp’s Instagram page."

Harrison thought it odd for an alleged abuser to be featured so prominently on KYRC’s social media. Then Brown showed up in Kaepernick’s #10for10 campaign ̶ Kaepernick's pledge to donate $1 million to charity by partnering with celebrities to match $10,000 donations to so-called worthy causes. "Including Brown in #10for10 didn’t make any sense to me, particularly not with #MeToo and #TimesUp dominating the news cycle. My distress was born of the shock of discovering that Kaepernick was one of the people who didn’t seem to care about Brown’s violent transgressions against women." She unpacked this troubling discovery further:

"Be just in an unjust room. That’s something Kaepernick says from time to time. If he can’t live up to this maxim when he gets to choose who’s in the room with him, can he be expected to lead when there’s more at stake than the meagre consequences of telling a man who is violent with women: No, you don’t get to sit with us — just go and be a multi-millionaire recording artist?

"Kaepernick misuses his power sometimes. That’s what Salome’s messages got me to see. Kaepernick invited a known abuser to stand with him on more than one occasion. That’s not something any of us should dismiss. I shouldn’t have dismissed it."

Harrison says associations with people of dubious moral character "are grenades with the pins jostled loose, and Kaepernick is lucky not to have been caught in an explosive news cycle. He should rethink whatever process is introducing carelessly handled munitions into his ecosystem. He should also examine what slippages in his moral center are allowing him to participate in this reputational Russian roulette."

It's also troubling and unethical, Harrison says, the way Diab blurs the boundaries between her radio program on Hot 97 with celebrity guests and Kaepernick's Know Your Rights Camp. She recruits guests to raise awareness and solicit support for Kaepernick and the camp. The camp in turn uses its social media to help celebrity guests sell their releases. "I believe it crosses the line into being unethical," Harrison says.

Harrison feels as if a cult of personality is developing around Kaepernick and it's the work of narcissists. And he must get a handle on whatever is driving the dissonance in his public image, eliminate the problem and establish a firmer ethical framework around him. The "grown man we’re being told is a civil rights leader lacks the agency to have a mature discussion with his partner and set clear boundaries about the way his public image is managed."

"Nevertheless, Salome was right: we too often overlook that men who take up the mantle of leadership have histories of mistreating women and that they cover up for themselves and other men who’ve done the same and worse. We grant them concessions they haven’t earned. We have a duty to examine these and other flaws in their characters more thoroughly. I’ve tried to do that fairly and without sensation with Kaepernick. ..."

The questions we're left with are these: will other media explore the claims of Salome about Kaepernick's history? Or will they sit on this and protect him and his social justice cause?