The Huffington Post is starstruck by LeBron James and his support of Beto O'Rourke, the Texas Democrat running against Sen. Ted Cruz for the U.S. Senate. Writer David Barden said James' political activism, including his wearing a "Beto for Senate" cap in San Antonio, is a "slam dunk."

James' L.A. Lakers played a game in San Antonio Saturday night and he entered the arena wearing the hat promoting the Democrat candidate. James also supported Democrat Hillary Clinton for president in 2016 and has a history of ridiculing Republican President Donald Trump. In a tweet last year, he addressed the president as "U bum." In a video on his website, The Uninterruped, James said Trump "doesn't give a f**k about people," and in a press conference he said "The people run this, country, not one individual, and for damn sure not him."

From the start of his post, Barden identifies himself as a supporter of O'Rourke and James. The word "we" is the second word in the post:

"If we ever needed a clearer sign that LeBron James isn’t going to just 'shut up and dribble,' this is it.

"The NBA superstar rocked a 'Beto for Senate' hat in support of Beto O’Rourke on his way to Saturday night’s face-off between the Los Angeles Lakers and San Antonio Spurs in Texas."

Barden notes this isn’t the first time James has gone public for O’Rourke, who was arrested in 1998 for drunk driving (the record was expunged only after he attended traffic school). In August, a fired-up James praised the Democrat for supporting disrespectful NFL protesters who chose to kneel in protest during the playing of the national anthem at games: 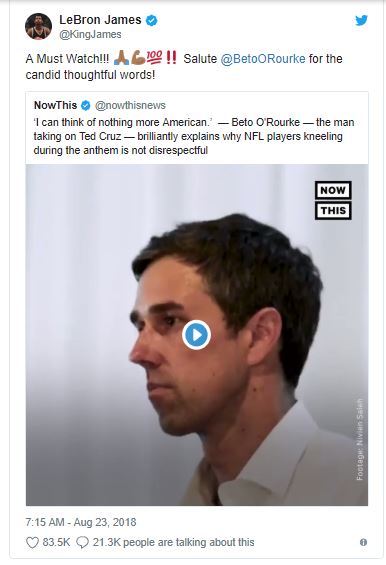 To push his social justice agenda, James has also produced a three-part docu-series that debuts on Showtime Nov. 3. The trailer for Shut Up and Dribble appears below:

Credit for the title of the docu-series goes to Fox News and syndicated conservative radio talk show host Laura Ingraham. Last February in response to James' profane comments about President Trump, she suggested LeBron and Golden State's Kevin Durant "shut up and dribble.'' Years earlier Ingraham wrote the book Shut Up and Sing as a response to the Dixie Chicks and other singers angering concert audiences with anti-George W. Bush rhetoric.

Barden says, "Ingraham’s insult came back to haunt her this July when it was announced that the Lakers star was producing a new Showtime documentary series that explores 'the changing role of athletes in our fraught cultural and political environment, through the lens of the NBA.' The program’s title? Well, it was a real slam dunk: 'Shut Up And Dribble.'”

Ingraham has been a major force in the culture war arena since James was in elementary school, so it's naive to think a leftist's insult would "haunt" her. Even a leftist as big as the legendary LeBron James.