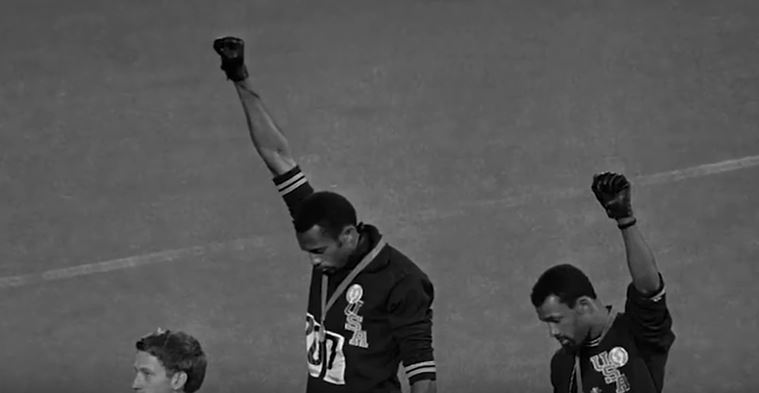 As the 50th anniversary of the protest-marred 1968 Olympic Games nears, the New York Daily News' Carron J. Phillips and Kareem Abdul-Jabbar are glorifying Colin Kaepernick, as well as the two disgraced sprinters who staged a black power salute during the national anthem in Mexico City. The International Olympic Committee stripped Tommie Smith and John Carlos of their medals and expelled them from the Olympic Village. A 1968 headline in the Evening News declared, "Games are Rocked by Black Power." Media reporting has shifted 180 degrees since then, as many reporters sympathize with radical social justice warriors.

After winning medals in the 200-meter dash at Mexico City, Smith and Carlos appeared on the victory stand shoeless and in black socks. Carlos covered up the “USA” on his uniform with a black T-shirt to “reflect the shame I felt that my country was traveling at a snail’s pace toward something that should be obvious to all people of good will. Then the anthem started and we raised our fists into the air.” The stunned audience in the stadium was silent as the Star Spangled Banner was played.

In the decades since then, the sprinters have been turned into heroes by the Left. There's a statue honoring them in California. President Barack Obama celebrated them in the White House. They are the subjects of documentaries and invited, as heroes, to speak on college campuses.

"Fifty years later, Colin Kaepernick is dealing with the same thing," writes Phillips, the Daily News' watchdog at the intersection of sports, race and social issues. "But before we can talk about everything that happened in 1968, and how the Olympics Games were a landmark moment for black athletes speaking out about social issues, we need to start with the Muhammad Ali Summit that took place the year prior, which served as a catalyst for the ‘68 Games."

Kareem Abdul-Jabbar, then a college basketball superstar at UCLA who boycotted the '68 Games, attended that summit. He told the Daily News: “The late 60s and the 70s was politically and socially the most contentious time in American history. The youth of America — of all races, ethnicities, genders, and gender identities — were fighting at the same time to shake off the tight harness of the 50s mentality that Father Knows Best.”

What Abdul-Jabbar described as a tight harness was a popular television show that ran on CBS from 1954 to 1960. It featured Robert Young and Jane Wyatt as parents who offered their children sound advice and thoughtfulness whenever they encountered problems. Young might be compared now to Vice-president Mike Pence, a man rejected by the media Left for his devotion to faith and family, while the America-hating Kaepernick is hailed as hero.

Abdul-Jabbar said that Ali persuaded the black athletes at the summit of his religious sincerity and gained their support. Phillips says the 1967 event was a precursor to what would happen with Carlos and Smith in Mexico City, "and to the actions that the athletes of today are taking."

Abdul-Jabbar told the Daily News a 2018 summit would include Kaepernick, LeBron James, Steph Curry, Serena Williams and people who kneeled during the national anthem ― including cheerleaders at Kennesaw State University, the Miami Dolphin' Kenny Sills and Albert Wilson and more. They would discuss the importance of the First Amendment and, according to Abdul-Jabbar, "why everyone isn’t more interested in protecting that then worrying about who stands or kneels." The retired NBA star added:

"A conversation focused on the importance of Free Speech would be critical for athletes of this era, as they have a tool at their disposal that generations before them didn’t: social media."

Athletes have no trouble pushing social justice through social media, and they don't wait until game time and the national anthem to use it. Abdul-Jabbar said 1968 was "a horrible, painful time," just as Kaepernick and today's social justice warriors say of 2018. But "it was also an exhilarating and triumphant time. We changed things,” Abdul-Jabbar said.

Today national anthem protests, kneeling and black power salutes, are a mere footnote in reporting on NFL games. There are no longer headlines about disrespectful behavior "rocking" the spectacle of sport.