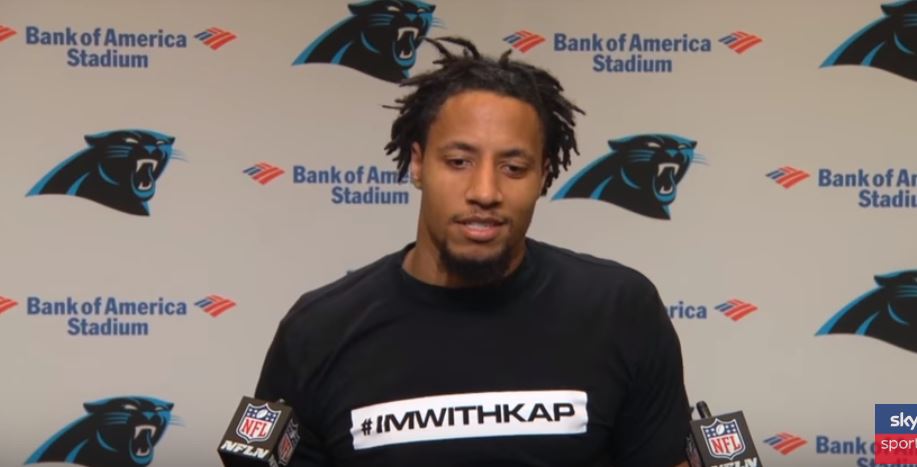 Multi-millionaire football player Eric Reid (see photo) is back in the National Football League and shooting off the kind of anti-American remarks that would make his old kneeling buddy, Colin Kaepernick, proud. In Jason Reid's story on The Undefeated, Eric Reid says America's 400-year history of racism continues, African-Americans lack economic opportunity and "You can’t live in your own house in America without getting killed."

A free agent for nearly six months (after five successful seasons as a safety in San Francisco), the Carolina Panthers signed Reid recently. Yet, to Jason Reid's pleasure, the defiant player is continuing with his collusion grievance against the NFL. In a press conference in Charlotte, Reid wore a t-shirt bearing the message "I'm with Kap." He echoed the same style of bitterness Kaepernick has issued since he began his protest in 2016:

“I’ll put it this way: Next year will be 2019. It will mark 400 years since the first slave touched the soil in this country. That’s 400 years of systemic [oppression], that’s slavery, Jim Crow, new Jim Crow, mass incarceration, you name it.

“The Great Depression, they came out with a New Deal, [and] black people didn’t have access to those government stimulus packages. The New Deal was set up, which is known as the modern-day middle class. We didn’t have access to those programs, the GI Bill, Social Security, home loans, none of that. So this has been happening since my people have gotten here. I just felt the need to say something about it.’’

Reid won't need any New Deal, stimulus package or bail-out. He signed a one-year, $1,390,000 contract with the Panthers (which Jason Reid mentions). With San Francisco in 2013, he signed a guaranteed contract for $8.49 million with a signing bonus of $4.54 million (which Jason Reid ignored in his blog). Eric Reid talks like a victim, but he sure seems to be "livin' the dream."

Reid told the reporters in Charlotte "we’re going to continue to hold America to the standards that it says on paper, that we’re all created equal. Because it’s not that way right now. But we’re going to keep pushing toward that."

Reid said he expects to face opposition on the topic of equality and then threw this verbal grenade:

"You can’t live in your own house in America without getting killed. It’s powerful. I will keep speaking for my people.’’

Despite another seven-figure salary, despite getting hired for the job he sought, despite getting another offer from San Francisco, Eric Reid still wants a piece of the NFL. He still believes the league colluded against him. “Without a doubt, yeah,’’ he said.

Quoted in the Jason Reid story, USC law school lecturer Thomas A. Lenz says Eric Reid's time with the Panthers could be "grist" for his collusion suit against the NFL. “With him returning, there’s also a question of what backlash, if any, will he see. Will he be playing? Will he be received well? How will [officials from] other teams react to him? Just everything that he encounters in the situation moving forward, and what led to him joining [the Panthers], could be” relevant in an arbitration hearing.

Though Reid continues to play the victim role, The Charlotte Observers' Jourdan Rodrigue reported Monday that Reid may be in the starting lineup for the Panthers' next game. Reid hasn't decided yet if he'll kneel during the national anthem.