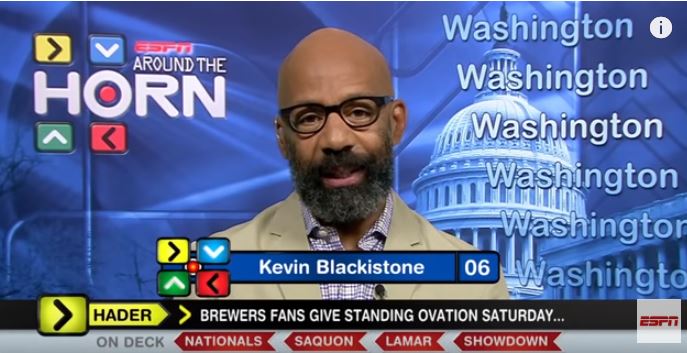 The New York Daily News joins a growing chorus of sports media raising the argument that Nike has hijacked Colin Kaepernick's social justice protest against racial inequality and police brutality. Dave Zirin, the "fire-bellowing" sports editor of The Nation, charged that Kaepernick's cause can't be "branded" by Nike. Kevin Blackistone, writing his version of that narrative for the Daily News, and a frequent panelist on ESPN's Around the Horn talk program, stunningly says Nike was never about social justice.

"As black America churned a few springs ago in what seemed like a never-ending live stream of unarmed black men being summarily killed by police," Blackstone writes, Nike issued a statement stating it supports efforts to bring equality to society. He says Nike has heavily appropriated — and angered — black culture by holding a #LawEnforcementAppreciationDay sale offering 30-percent discounts for police officers. Even though, "The inordinate deadly police encounters continued, of course."

During the broadcast of Thursday's NFL season opener between Atlanta and Philadelphia, Nike debuted its new TV ad campaign, which Blackistone says is a "mostly silent, stoic, embodiment of that black disenchantment with policing as the face of the 30th anniversary of its iconic 'Just Do It' campaign." Nike ads said nothing about the reason Kaepernick is no longer an NFL player: he protested "against unchecked police lethality upon black men." Blackistone says of the divisive new campaign:

"Nike bought Kaepernick's silhouette, but passed on his substance. It mollified his militancy. It may have shoehorned Kaepernick back into the league he is suing, where Nike is the maker of the game apparel, but it did so with a Kaepernick much less biting than his sitting and kneeling during the packaged patriotic opening of every game became. Most disappointing is that Kaepernick assented, apparently, to Nike's makeover."

Nike is not and never was a social justice organization, Blackistone asserts. "It didn't become a social justice business, either, just because it extended its commercial relationship with Kaepernick and highlighted it." Nike also made a donation to the campaign of Republican senatorial candidate Luther Strange, who was President Donald Trump's horse in the race to fill Jeff Sessions' Senate seat in Alabama. Nike also attracts criticism for its ties to foreign sweatshops.

Blackistone includes a quote from Ana Jimenez, international coordinator for United Students Against Sweatshops, who asks if Nike is "hiding [questionable labor practices] behind black and brown athletes?"

Progressives will always find people who aren't progressive enough for them. But Nike has a place solidly in the mainstream of support for radical social justice crusades. One News Now's Michael Haverluck reported last year that, Nike has been found to be a major supporter of the abortion industry and the LGBT agenda.