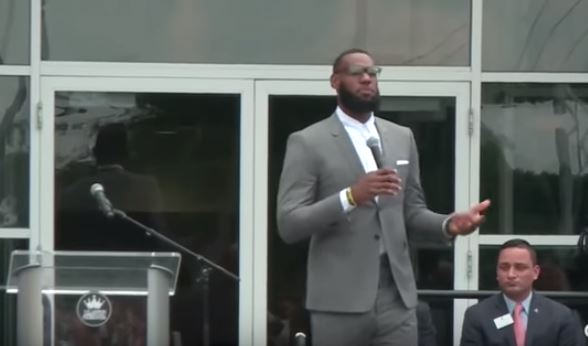 Just days after LeBron James opened his new school for under-privileged third- and fourth-graders in his hometown of Akron, Ohio, hardcore leftist Dave Zirin has given us another Chris Matthews thrill-up-the-leg moment. The sports editor of The Nation, Zirin practically bows at the altar of "King" James. He also blamed the need for the school on Education Secretary Betsy DeVos.

It blows Zirin's mind that "the greatest basketball player on earth opened a new public school." He added:

"In addition to meals, job training for parents, and even a bicycle and helmet for every student, the school offers guaranteed college tuition for everyone who goes on to graduate high school."

Meanwhile, Zirin complains, children are freezing in Baltimore' dilapidated government schools. Here's a hint, Dave: You can thank James' Democrat friends (like Hillary Clinton) who trap them there by opposing school choice. Those children and multitudes more have no hope of escaping the government school slums, thanks to Democrats beholden to NEA campaign support.

Zirin brought up a quote by his leftist friend Aaron Maybin, a former NFL player and now an art teacher in Baltimore. He said, “How would your kids concentrate if you sent them to school in a refrigerator for eight hours? With failing lighting. Two classes in one room? We tried our best as educators. They tried their best as scholars. But they are dealing with a lot already. And now they are supposed to learn in the dark and in the cold.”

Where does Zirin put the blame? Squarely on Betsy DeVos, the secretary of education for all of 18 months (compared to decades of the Democrats' damage to public education.) She's "marauding" an agenda of for-profit schooling. He says government education needs a Marshall Plan for public education that gives every student sparkling new facilities like James' I Promise School.

James said his funding of the school comes with political strings attached. He endorsed Clinton two years ago and he shilled for ObamaCare; wonder how he leans? During a media tour to promote the school, he used the opportunity to "challenge Trump’s racism," telling CNN, “He’s kinda used sport to kinda divide us" and embolden racists. These young children should do well in political science class.

It's a wee bit premature for Zirin and his media comrades to place I Promise on a pedestal before the first report cards have been issued. Time and longitudinal studies will demonstrate the efficacy of this approach to education.