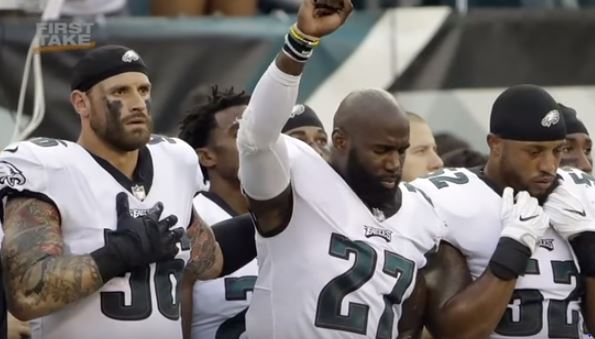 The NFL's new anthem policy is an ill-conceived move that plays right into the hands of a president who demonizes the league to rile up his supporters, writes Sports Illustrated's Trump-hating, flag-hating Charles Pierce. Furthermore, Pierce compares the anthem policy and Trump remarks on the NFL to 20th century British tyranny.

Pierce writes it is plain to see that the president intends to use the National Football League and its players as a "rhetorical punching bag" for political benefit and cheap applause lines. His proof? It comes from President Trump's recent Montana speech when he criticized the NFL's new anthem policy requiring respectfulness during the national anthem:

"The central issue, of course, is the organized protest by some NFL players during the playing of the national anthem, a basically weird ritual that now has been accompanied by giant flags, jet fighter flyovers and enough militant patriotism to turn Douglas MacArthur into Bertrand Russell. (This, of course, does not include the thousands of patrons who take advantage of the sprawling spectacle to hit the beer lines.) The NFL tied itself in knots trying to deal with the protests, and with the fallout from them, and with the ginned-up outrage from professional political marionettes."

This new policy is an offense, in Pierce's view, to the rights of players to demonstrate. (See photo of Eagles' players protesting) "You didn’t have to be Machiavelli to know that the new policy never would be allowed to work, that staying in the locker room would soon be transformed into another anti-American gesture, by those people whose job it is to gull the rubes."

The NFL and its players are deeply politicized now whether they want to be or not, Pierce continues. The league set a trap for itself by attaching itself to "corporate, militarized patriotism, and now the knife has turned":

"The league enjoyed a free ride on glib patriotic display for more than 60 years, and now the bill is coming due. The NFL has a choice. It can continue to fashion its responses to the whims of a president whose appetite for conflict and controversy is so limitless that the NFL will be forced into embarrassing concession after embarrassing concession while alienating its highest-profile employees, who have every right to believe themselves jerked around on an issue that is of paramount importance to them."

The NFL can right these wrongs by following the example of how, a century ago, Ireland stood up to resist British tyranny. The Gaelic Athletic Association (GAA) governed hurling and Irish football, and since its founding in 1884 the GAA supported the Irish nationalist movement. It led a Day of Defiance against Great Britain's requirement that sports teams be licensed.

Pierce says the NFL should stand up to his equivalent to British tyrants, Trump, rescind its new policy (which will fail) and allow players the freedom to do whatever they want to do during the national anthem.

Pierce also calls for the NFL to stage its own Day of Defiance, "demonstrating to its players that the NFL is committed to the values of the country as deeply as it is to the forms and pageantry that get draped over those values. But that would require the league to re-evaluate everything about how it perceives itself so that it can stand up for itself properly."