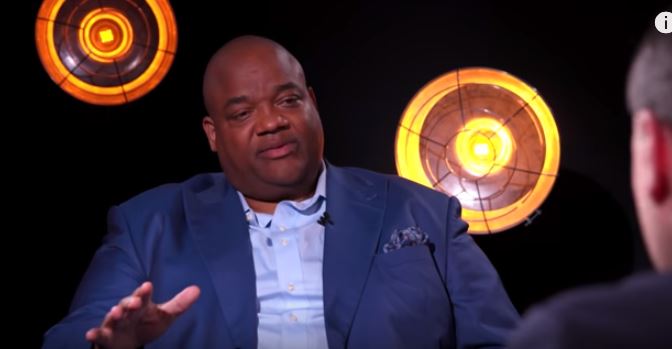 In a Daily Wire interview with Ben Shapiro, Fox Sports 1's Jason Whitlock said pro football pariah Colin Kaepernick has adopted a flawed political strategy of kneeling for the national anthem to raise awareness for police brutality. The former quarterback of the San Francisco 49ers remains an unwanted free agent at a time when the NFL has put an end to on-field protests of the national anthem.

Whitlock, who co-hosts the TV program Speak for Yourself with Colin Cowherd, said Kaepernick comes from a privileged background and he's not helping people:

"It fits into my point of view that he comes from a privileged background, whether he acknowledges it or not. His worldview is privileged, and he thinks he's helping disadvantaged and, or poor black people, with what he's doing, and he's actually not. They created ... he created a conversation about the national anthem."

Kaepernick and other NFL players following his protest lead since he last played football in 2016 keep talking about racial inequality and police brutality, but their misguided protests are aimed at, and take place during, the pre-game playing of the national anthem. They're not down at the police station yelling into bullhorns and few of them are even talking with police officers. Nothing Kaepernick did was strategic, Whitlock says:

"And yet he thinks you can effect change with emotion or with some symbolic act that's not well thought-out. He doesn't understand that Martin Luther King and the people of the civil rights movement—that was a very strategically executed plan."

To illustrate how Kaepernick is not the right person to advocate for his issues, Whitlock recalled how a woman with an illegitimate child was the first African-American who refused to give up her seat on a bus. Civil rights leaders realized she was the wrong person politically, so Rosa Parks did the same thing in Montgomery, Alabama in 1955. She was the one whose actions led to the bus strike and she became an important symbol of the civil rights movement.

Whitlock said, "I just think Kaepernick has done something that is unplanned, he started a conversation about the national anthem, not about the issues he's saying he's trying to address. And I think it's because he just doesn't know what he doesn't know. I see social media feeding his lack of knowledge."

Yet, Whitlock says, anyone who suggests Kaepernick is making mistakes and there's a better way to go about it, gets shouted down as an Uncle Tom or as someone who isn't acting in the best interests of black people.

"Because anybody that knows Colin Kaepernick ... he's not equipped to carry this conversation. That's why he avoids interviews. He doesn't want to be cross-examined because he'll fall apart because he doesn't understand these issues."

Many members of the sports media, both black and white, have anointed Kaepernick as a legendary civil rights leader in the mold of Muhammad Ali. Liberal organizations have lavished awards on him. As month after month ticks by with no new football contract, Kaepernick has resorted to suing the NFL for collusion and issuing negative tweets bashing America and public safety officers. He's hoping to make more money in court than he could make on a football field, and he's prompted many long-time fans to turn their backs on the NFL and its social justice warriors.