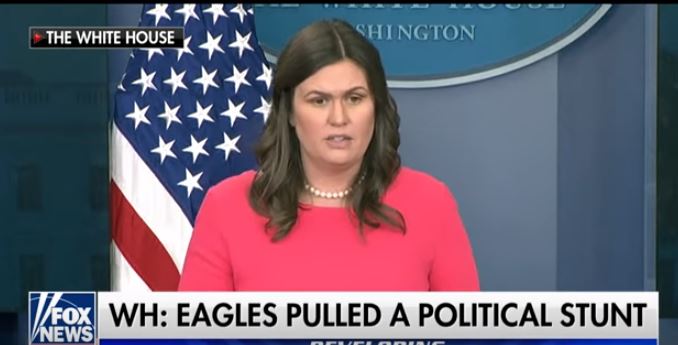 Dave Zirin, the bombastic sports editor of The Nation and the author of books praising sports radicals John Carlos and Michael Bennett, just called President Donald Trump a "racist, sexist bottom feeder." Zirin blitzed Trump over the president's disinviting of the Super Bowl champion Philadelphia Eagles to the White House earlier this week. It was an event that most of the Eagles had planned to boycott.

"Why Donald Trump Disinvited the Eagles from the White House" is vintage Zirin red meat: "In a year of irredeemably stupid statements from this White House, it is difficult to imagine one more fraudulent and cowardly than what was belched from 1600 Pennsylvania Avenue yesterday evening." President Trump's statement, in part:

"The Philadelphia Eagles are unable to come to the White House with their full team to be celebrated tomorrow. They disagree with their President because he insists that they proudly stand for the National Anthem, hand on heart, in honor of the great men and women of our military and the people of our country. The Eagles wanted to send a smaller delegation, but the 1,000 fans planning to attend the event deserve better."

White House spokesman Sarah Huckabee Sanders (in above photo) told the press the Eagles pulled a "political stunt," as only a few team members and their mascot committed to attending. Trump replaced the Eagles' visit with a patriotic celebration of America, including the national anthem and the singing of God Bless America. To which Zirin naturally objected:

"These players don’t 'disagree with their President' because he wants them to stand for the anthem and honor the military. That is nonsense. The truth is that most of this highly politicized team was not going to go to the White House because they see 'their President' as a racist, sexist bottom feeder and they don’t want to be used as political props for a photo op to further his agenda of division and demonization."

These remarks were in reference to a February tweet by former Eagles' player Torrey Smith laying into Trump about sexism and calling protesters SOBs. But there's much more to it than the racist-sexist smear. The athletes and coaches Zirin champions are out-and-out progressives, Hillary Clinton supporters and some of them, namely LeBron James, who shilled for ObamaCare.

Zirin thought Trump's demagoguery of NFL protesters would end with last week's league decision banning disrespect toward the flag and national anthem. He calls it a "harsh policy" that "enraged their players, the union—and even a minority of owners—all to appease Trump (minority? try invisible; the vote was 32-0 in favor!). But there is no appeasing a petulant bully. Trump, as he has told NFL owners, sees this as 'a winning issue."':

"Let that sink in: He sees the scapegoating of black athletes who stand up to police violence as a winning issue. Since Trump sees this as a winner, he was never going to let it go and, true to form, he hasn’t. Now NFL owners now look worse than stupid: They look feeble. They didn’t just get played. They played themselves."

Neither Trump or fans view player protests as "standing up to police violence." When viewing NFL games the last two seasons, they've seen players kneeling, sitting down eating bananas (Marshawn Lynch of Oakland) or standing with a raised fist during the national anthem. They have not seen news images of players protesting police at the police department.

NFL owners should have shown the courage to link arms with their players and "stand with that quaint notion known as the truth," Zirin writes. They could also learn a lesson from Smith, who tweeted "after Trump’s gaseous statement" that "The President continues to spread the false narrative that players are anti military.”

Zirin concludes his latest scathing attack on Trump by claiming "NFL players are more likely to live in a fact-based universe than the president ... ." Those would be progressively biased facts.