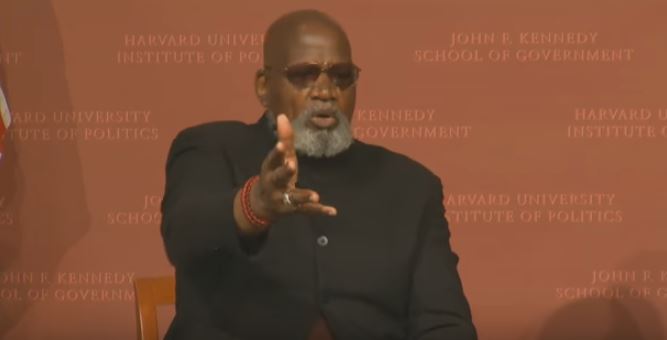 Harry Edwards, the architect of sports protest, is livid over the NFL's shutdown of power salutes, sitting and kneeling during the Star Spangled Banner. He told USA Today sports writer Jarrett Bell it's proof positive African-Americans are still battling the residuals of slavery.

In 1968, Edwards organized the Olympic Project for Human Rights and called for a boycott of the Mexico City Olympics by African-American athletes. He got one taker, Kareem Abdul-Jabbar. Americans sprinters Tommie Smith and John Carlos went much further, all the way to Mexico to win medals and then spit in America's eye from the victory stand. As the Star Spangled Banner began to play, they raised black-gloved hands in a power salute protest.

This was seen as detestable and unacceptable behavior by incensed Americans. Including the U.S. Olympic Committee, which sent them home in disgrace. But to Edwards and USA Today agenda journalists like Bell, they were merely raising "consciousness about societal injustices–much like Colin Kaepernick in 2016 when he kneeled during the playing of The Star-Spangled Banner."

Now 75, Edwards is raising his fist in defiance of the NFL for disallowing anthem protests. The league's black players exist in “white space” in America, he says (along with truck loads of greenbacks):

“You scratch your head and wonder: ‘Are they really this racist? This stupid? What’s driving this?’ I think that at a very fundamental level, we are still battling the residuals of 400 years of slavery. A lot of the owners think they own the players. They own the franchise.”

All of a sudden business owners' contractual rights to receive the employees' services in return for mega bonuses and contracts are controversial? Yes, and the common expectation of maintaining good customer relations is now seen by Edwards as wildly radical: “It’s almost like ’68 has come back through the mirror, including the same issues, including police killings of African-Americans,” says Edwards, a man who's stuck in the past. "This is the dumbest move possible. They put the protest movement on blast. They just created a bigger stage than ever,” he says.

If NFL owners are like slave-holders and plantation owners, Edwards and other protest supporters view President Donald Trump as the master who calls the shots. The owners are allowing him to define patriotism as it relates to the anthem, Edwards says.

Edwards tossed a few crumbs to the NFL for giving $89 million to players for social justice activism, but he says the protest ban "echoes themes espoused by President Trump, who has attacked the league with vitriolic rhetoric." He complained that Trump said Thursday on Fox & Friends on protesting players maybe "shouldn’t even be in the country.” The NFL's new policy, along with Trump's words, could set "the stage for the return of the controversy the league wanted to go away."

Not that Edwards has any intent of letting the protesters' social unrest fade away. He's given NFL Commissioner Roger Goodell some digs and warnings, through a letter promising as much. Goodell, he says, should:

"Work in collaboration with the players in addressing the issues that fuel the protests, rather than focusing on retribution and punishment.

"Take a long-term view, recognizing that the movement could coalesce into another wave of athlete activism.

"Realize that retaliation would turn protesting players into martyrs while positioning the league as an entity opposing the merits of the issues that are of concern to the players."

It certainly sounds as if the architect of athlete protest is far from finished fomenting anger, and, unlike 1968, he now has a lot of Jarrett Bells in the sports media who will take dictation from him and help expand his influence.